Justin Fields To Start In Week 13

DECEMBER 3: Getting Fields back is crucial for the Bears this week as their backup quarterback, Siemian is being placed on IR. To fulfill the backup duties, Chicago has signed the practice squad quarterback, Peterman, to the active roster, according to Tom Pelissero of NFL Network.

DECEMBER 2: Justin Fields has made steady progress since suffering a dislocated shoulder, and he will ultimately miss just one game as a result of it. The Bears quarterback is not on the team’s Week 13 injury report, meaning he is in line to start on Sunday. 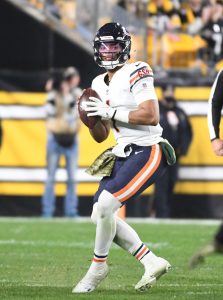 Fields was carted off the field during Chicago’s Week 11 loss to the Falcons. The injury took away his opportunity to record three consecutive 100-yard rushing games, but more importantly, also left his short- and intermediate-term availability in question. After further testing, it became clear that his return to game action would be dependent on pain management.

The 2021 first-rounder expressed optimism in being able to suit up for Week 12, but was held out. He received first-team reps in practice this week, though, and was listed as a full participant for the past two days. As a result, head coach Matt Eberflus said Fields is “100%” with respect to his health status leading into the upcoming contest against the Packers.

“Right now he feels, and we feel, that the mobility and strength is there for him to protect himself,” Eberflus added, via ESPN’s Courtney Cronin, on Twitter, “and he feels like he’s a hundred percent, ready to go.”

That will allow the Ohio State alum to pick up where he left off in what has become an encouraging second year in the NFL. Fields has taken an incremental step forward as a passer in 2022, operating within a very run-heavy scheme and with a pass-catching corps which will no longer include No. 1 wideout Darnell Mooney for the rest of the season. On the ground, though, Fields has become the team’s offensive focal point with a league-leading 6.8 yards per carry and seven rushing touchdowns.

Even as Fields is set to return, however, the Bears will be shorthanded under center moving forward. Veteran backup Trevor Siemian – who filled in for Fields last week – suffered an oblique injury during warmups. While he was able to play through it during Chicago’s loss to the Jets, the 30-year-old will now undergo season-ending surgery, per an announcement from Eberflus. That will leave Fields and Nathan Peterman available as signal-callers for the remainder of the season.

The 3-9 Bears are not in the thick of the NFC playoff race, but they will have the opportunity to evaluate Fields both in terms of his recovery, and his continued career ascension as the rebuilding squad eyes improvements in the offseason.

11 comments on “Justin Fields To Start In Week 13”