Broncos interim head coach Jerry Rosburg recently threw his hat in the ring for the team’s full-time job, but the veteran coach won’t be sticking around Denver in any capacity. According to ESPN’s Field Yates (via Twitter), Rosburg has been let go by the Broncos and won’t be a part of the next coaching staff. NFL Network’s Ian Rapoport seems to confirm (on Twitter) that Rosburg won’t be the team’s next coach, but he notes that today’s news is merely procedural and the veteran coach could be back in Denver next season. 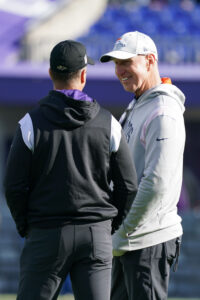 The team responded to the changes. After losing in blowout fashion to the Rams on Christmas, the Broncos took the Chiefs down to the wire before defeating the Chargers’ starters in the season finale. We heard that team executives were pleased with the interim head coach’s performance and let him state his case to remove the interim tag following the season.

Instead, the team will turn elsewhere for their next head coach. Earlier today, Troy Renck of Denver7.com wrote that 49ers defensive coordinator DeMeco Ryans and former Stanford head coach David Shaw were “gaining momentum” for the head coaching job. We also heard yesterday that Sean Payton’s candidacy was losing steam in Denver, removing another candidate from the list (alongside Rosburg and Jim Harbaugh, who pulled out of the race after deciding to stick with Michigan). Evero ended up interviewing for the job a few weeks ago, and the organization later blocked the Falcons’ request to interview him for their defensive coordinator vacancy.

As for Rosburg, there’s a good chance the 67-year-old coach heads back to retirement. Rosburg has been coaching since the 1970s, and he got his first NFL gig when he was hired as the Browns special teams coordinator in 2001. He’d end up spending 18 years in the NFL prior to his first retirement, including a decade-long stint as the Ravens ST coordinator.