On Monday morning, the Packers announced that one of their players has tested positive for the coronavirus. That player is running back A.J. Dillon, according to NFL.com’s Tom Pelissero (on Twitter). 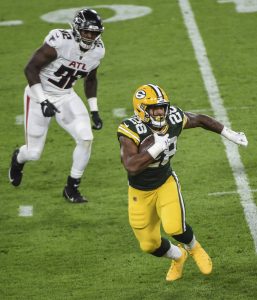 With that, the Packers’ Thursday night game against the 49ers is now in jeopardy. Dillon has been in especially close proximity with the team’s other RBs, heightening the odds of potential transmission. In any event, Dillon will be a no-go for this week.

Dillon played on ten offensive snaps and seven special teams snaps against the Vikings on Sunday. The hope is that there was no viral spread during his limited usage.

The league tests its players on Sunday morning before each game, but the results do not come in until Sunday night or Monday morning. Similar to the situation with the Ravens and star cornerback Marlon Humphrey, the team did not have knowledge of Dillon’s test results until after the game was played.

The Packers selected Dillon with the No. 62 overall pick in this year’s draft. Once projected to play linebacker at Boston College, he’s a promising talent as a power RB. So far this year, he’s averaging 4.2 yards per carry on a limited sample of 23 totes.

The Packers have formally signed second-round pick A.J. Dillon, per a club announcement. The running back out of Boston College is set to earn $5.29MM over the course of his four-year deal, per the terms of his slot at No. 62 overall. That sum includes a $1.404MM signing bonus.

Dillon dazzled as a frosh, running for 1,589 yards and 14 touchdowns. He was slowed a bit by a leg injury in 2018, but he came roaring back last year. In his final year at BC, Dillon posted 1,685 rushing yards and 14 touchdowns while putting together one heck of a highlight reel. Among his brightest moments – a pair of 200-yard games, against NC State and Syracuse.

Dillon, who once thought his football future was at linebacker, stands at nearly 6’0″ and weighs roughly 250 pounds. The powerful runner will now look to make a dent as a pro, playing alongside incumbent starter Aaron Jones.

While CBA negotiations have been on the January schedule for a while, the NFL and NFLPA have already resumed talks. The sides convened for negotiations last week, Judy Battista of NFL.com reports (on Twitter), adding the goal remains to have a new agreement finalized by season’s end. The NFL initially sought to have this done before Week 1, an unrealistic scenario since the current CBA does not expire until March 2021, and has since inserted a 17-game season into the talks.

Roger Goodell said he and the owners discussed the CBA for roughly an hour at this week’s league meetings, but the 13th-year commissioner is uncertain how far apart the owners and players are. Should a deal not be completed by March, new elections of an NFLPA president and new members on the union’s executive committee could change the tenor of the months-long negotiations, per Pro Football Talk’s Michael David Smith.