Could Adam Silver go from the pages of Hoops Rumors to Pro Football Rumors? NFL owners have asked Silver if he would be willing to switch leagues and replace Roger Goodell as commissioner, according to Ramona Shelburne of ESPN.com. For what it’s worth, Silver claims he has given no thought to the possibility. 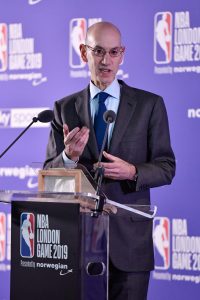 “I’ll just say I have not given it any thought,” Silver said. “I feel very fortunate to be in this position. As a longtime fan, as a longtime league employee, the opportunity to become the commissioner of this league was beyond anything I even ever dreamed of as a kid. I’ve loved every day I’ve been in this job, and I think there’s nothing but enormous opportunity ahead for this league. And ultimately, I realize I’m just passing through like every player who’s gone through this league and ultimately like every owner, and I feel an enormous obligation to the fans and to this greater NBA family to do my best and try my hardest every day. But that’s where 100 percent of my focus is.”

The NBA has gained serious traction under Silver, but the NFL still reigns supreme in American sports. A move to football would represent a major step up for the young exec and would likely mean a larger salary.

In Silver’s five years as the NBA’s head honcho, league revenues have increased from $4.8 billion to roughly $9.1 billion. Meanwhile, team valuations have shot up 267%. Those results have some NFL owners salivating and there are some owners who would like to move on from the bad PR associated with Goodell.

Of course, the NFL has also seen enormous growth under Goodell, so it’s far from certain that they’ll give him the hook before his contract runs out after the end of the 2024 season. Instead, Silver could be a potential successor for Goodell – his own deal with the NBA expires after the 2023-24 campaign.