Here are the latest mid- and late-round rookie contracts agreed to around the league:

Syracuse safety Andre Cisco will turn pro and enter the 2021 NFL Draft, as Ian Rapoport of NFL.com tweets. Cisco, who signed with agents Andre Odom and David Mulugheta of Athletes First, could wind up as a first-round pick. 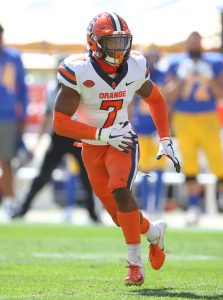 Cisco burst on to the scene with seven interceptions in his freshman year, followed by five INTs in 2019. Then, in September, the preseason first-team AP All-American tore his ACL during pregame warmups when he collided with a teammate. The injury ended his season after just two games and, ultimately, capped his collegiate career.

The Long Island native has the potential to steal the show at the combine, if he’s fully recovered by then. Reportedly, Cisco has clocked a 4.33-second 40-yard-dash in the past, along with 17 bench press reps of 225 pounds. Though he’s been knocked for trying to force interceptions, Cisco’s big play ability and athleticism should bring him lots of attention in the buildup to the draft.

Also working in Cisco’s favor — a safety class that is viewed as relatively weak. He’ll be joined by Oregon’s Jevon Holland, who opted out of the 2020 season and shifted his focus towards draft prep.