Capable of high-end slot coverage, as his father was in Minnesota and Buffalo, Antoine Winfield Jr. finished his Minnesota career as an All-American safety.

The Bucs did not have a safety grade in the top 60, per Pro Football Focus, last season. While Tampa Bay’s defense took a big leap in 2019 — finishing fifth in DVOA — the group needed help on its back end.

Winfield finished with seven interceptions as a senior and registered 83 tackles. Scouts Inc. ranked the 5-foot-9, 203-pound defensive back as its No. 29 overall prospect.

Minnesota safety Antoine Winfield Jr. is declaring for the 2020 NFL draft, as ESPN’s Josina Anderson reports (via Twitter). His name is very familiar to NFL fans, as his father, Antoine Winfield Sr., played in the league for 14 seasons after being selected by the Bills in the first round of the 1999 draft. Also a defensive back, the elder Winfield made three consecutive Pro Bowls with the Vikings from 2008-10. 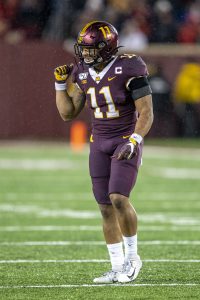 The younger Winfield played in 10 games as a true freshman in 2016 and recorded 52 tackles, a pick-six, and three passes defensed. He missed much of the next two seasons due to injury, but he was a star in 2019, recording seven interceptions, 83 tackles, and three sacks. He did not win the Jim Thorpe award, as his father did in 1998, but he established himself as one of the best safeties in the class.

As such, he has a real chance of being selected in the first round. His injury history may hurt his stock, but he has good technique, is capable against the run and the pass, and has excellent ball skills to boot.

Teams like the Cowboys, Saints, and 49ers could be in play for Winfield, as could his father’s old team, the Vikings.