We learned earlier this week that Packers tight end Jimmy Graham had suffered a broken thumb, and it was expected that the former All-Pro would be out for the foreseeable future. However, head coach Mike McCarthy told reporters that Graham is going to try to play on Sunday against the Vikings.

“I know he intends to try to go,” McCarthy said (via ESPN’s Rob Demovsky). “That’s his intention…There’s going to be a transition through the practice week and see different splints and things like that. So that’s why you have to work through it.”

The 31-year-old has 34 receptions for 452 yards and two touchdowns during his first season in Green Bay. If he was forced to miss time, the Packers would likely turn to Lance Kendricks, Robert Tonyan Jr., and/or Marcedes Lewis. 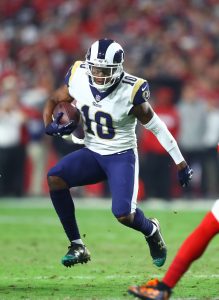 The Rams’ worst fears have been confirmed. Wide receiver Cooper Kupp has been ruled out for the season with a torn ACL, a source tells Adam Schefter of ESPN.com (on Twitter). 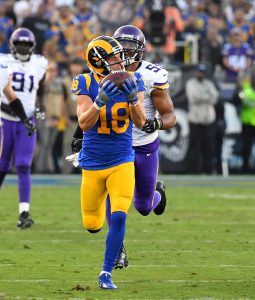 Kupp, 25, was in the midst of another strong season with 40 catches for 566 yards and six touchdowns in eight games. Unfortunately, the injury that forced him out of Sunday’s game against the Seahawks will end his season and leave the 9-1 Rams without one of their best weapons.

The third-round pick out of Eastern Washington was a pleasant surprise for the Rams last season as he racked up 62 catches for 869 yards and five scores. This year, before the injury, he was on pace for about 70 catches for 985 yards and ten scores.

The Rams still have plenty of pass-catching ammo thanks to Brandin Cooks and Robert Woods, but each player will attract more attention without Kupp on the field. Josh Reynolds, JoJo Natson, KhaDarel Hodge, and Nick Williams are also on the roster, so the Rams might not have to sign another receiver.

Cooper Kupp left the Rams’ win over the Seahawks with a knee injury, and it appears it’ll be season ending. The Rams fear Kupp tore his ACL, sources told Ian Rapoport of NFL Network (Twitter link). 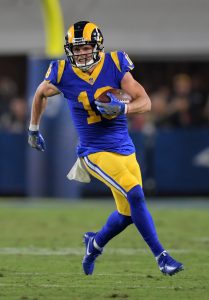 It’s devastating news for the Rams, who improved to 9-1 on the season with their victory today. Kupp will almost certainly miss the remainder of the season, which is a big blow to the NFC’s top team. Kupp had suffered a different knee injury earlier this season, and had only recently returned after missing two games.

Kupp left the game with a non-contact knee injury and was immediately ruled out, so it looked grim from the start. Kupp was having a great year before going down, catching 35 passes for 527 yards and six touchdowns in less than seven full games.

Even with Kupp out, the Rams still one of the best arrays of offensive weapons in the league. The team will lean heavily on Robert Woods, Brandin Cooks, and Todd Gurley in the passing game moving forward. Tight ends Tyler Higbee and Gerald Everett will also both be counted on to step up.

Cooper Kupp is expected to make his return tomorrow. As NFL.com’s Jason B. Hirschhorn notes, the wideout wasn’t included on the Rams’ final injury report, an indication that he’s good to go for his team’s matchup against the Saints.

Kupp missed the past two games as he dealt with a knee injury, but the receiver had made progress throughout the past week. Head coach Sean McVay all but confirmed Kupp’s return yesterday, saying the wideout was on track to return to the lineup.

“He is, yeah,” McVay said (via ESPN’s Adam Schefter on Twitter). “He was feeling good yesterday. Today will really be the big day just based on the way that we’re operating as far as practice goes. Our belief is that he’s going to be good to go.”

The 25-year-old was proving that his impressive 2017 rookie campaign wasn’t a fluke, as he’s hauled in 30 receptions for 438 yards and five touchdowns in six games (six starts) this season. The former third-rounder had also collected four rushing attempts and a punt return.

Kupp will be rejoining an electric Rams offense that’s also led by quarterback Jared Goff, running back Todd Gurley, and fellow wideouts Brandin Cooks and Robert Woods. With Kupp back in full health, the team could realistically look to move on from any of their other four healthy receivers: Josh Reynolds, Nick Williams, Jojo Natson, and KhaDarel Hodge (the team also has Pharoh Cooper and Mike Thomas sitting on the injured reserve).

Trading up to No. 1 overall in 2016 for quarterback Jared Goff left the Rams without a first-rounder this year, meaning they didn’t pick until No. 44. That’s where they landed Everett, who transferred from UAB to South Alabama after the 2014 season and ended his college career with back-to-back 40-catch seasons. With the Rams having released their previous No. 1 tight end, Lance Kendricks, earlier this offseason, the 6-foot-3, 239-pound Everett is in line to open his NFL career as a starter. Lance Zierlein of NFL.com likens Everett to the Titans’ Delanie Walker, a pass-catching machine who has racked up 282 receptions and 23 touchdowns since 2013.

Kupp, the 69th pick and the first of two third-rounders for the Rams, thrived at Eastern Washington, where he combined for FCS-record-setting numbers (428 catches, 6,464 yards and 73 TDs) over four seasons. Along with free agent pickup Robert Woods, the 6-2, 204-pound Kupp is one of two prominent newcomers in LA’s receiving corps, which was among the league’s worst last year.

Johnson was the Rams’ second choice in Round 3 (No. 91), and is coming off back-to-back three-interception seasons at Boston College. The 6-0, 208-pounder has the coverage skills necessary to start right away, per Zierlein, and is capable of playing both safety and cornerback.

The Rams still have five more picks to sign, including two fourth-rounders.

LSU running back Leonard Fournette will visit the 49ers prior to the draft, reports Matt Maiocco of NBC Sports Bay Area. While the 49ers would reportedly like to trade down in Round 1, Fournette could be a possibility for them if they keep the second overall pick. San Francisco already has a productive No. 1 back in Carlos Hyde, whom general manager John Lynch spoke highly of last week, but there are whispers that the rookie executive wants to make change in the backfield.

More on the upcoming draft: