The Jaguars are one step closer to signing their entire draft class. The team announced today that they’ve signed second-rounder D.J. Chark Jr. to his rookie contract. The wideout was selected with the 61st pick, and he was the eighth receiver off the board. 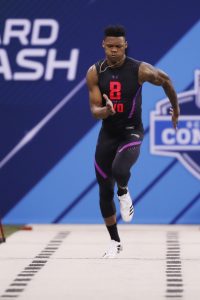 “It’s amazing,” Chark Jr. told John Oehser of Jaguars.com. “I’m here, and I’m on the team. I’ve been having a great week of OTAs. I’ve been joining the players and now I feel like I’m finally one of them because I put my name to paper.

The LSU product didn’t record a single reception during his freshman and sophomore season, and he only hauled in 26 catches during his junior campaign. Chark had a breakout season as a senior, however, compiling 40 receptions for 874 yards and three touchdowns. He also returned 18 punts for 190 yards.

After having lost Allen Robinson and Allen Hurns this offseason, the Jaguars were desperate for a wideout. Chark is currently projected to be the team’s second receiver behind Marqise Lee, although he’ll see competition from former fourth-rounder Dede Westbrook and free agent addition Donte Moncrief.

With the signing, Jacksonville has signed six of their seven draft picks. First-round defensive tackle Taven Bryan is currently unsigned.