Before the Colts released Brian Hoyer last week, they discussed trading the veteran quarterback to the Patriots, the club that ultimately signed Hoyer once he was cut, as Stephen Holder of The Athletic writes. The conversations seemed to be at least somewhat serious in nature, as Holder reports trade compensation was discussed, but a deal never came together. Had New England acquired Hoyer, it would have been responsible for the rest of the three-year, $12MM contract Hoyer signed with Indianapolis in 2019. Instead, the Patriots inked Hoyer to a one-year, $1.05MM pact that includes up to $2MM in available incentives.

Some have speculated that Bucs head coach Bruce Arians could make a play for his old pal David Johnson. However, if the Cardinals try to trade the running back, it’s unlikely that the Bucs will be in the mix, Josh Weinfuss of ESPN.com (on Twitter) hears. 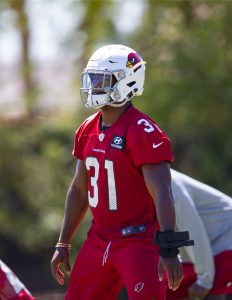 The Cardinals have gone on the record to say that cutting Johnson is “not an option.” The running back is due $13MM/year on his monster contract and releasing him would saddle the team with a $16.2MM dead money hit. If he remains on the team, he’d carry a $14.1MM cap charge for the 2020 season.

Johnson’s was once one of the league’s very best running backs. But, thanks to ankle and back injuries, he’s looked nothing like his old self. Last year, the Cardinals limited his carries and acquired Kenyan Drake via trade before the deadline, further downsizing his role. Drake, meanwhile, is on course to be a free agent later this month.

Even if Drake returns, the Cardinals have not discounted the possibility of keeping Johnson as backfield reinforcement. Then again, they don’t have a whole lot of options. Johnson, simply put, is not the player he used to be, and his contract is an anchor.

Last year, Johnson missed time and averaged just 3.7 yards on 94 totes. His last big year came in 2016, when he earned Pro Bowl and First-Team All-Pro nods as he ran for 1,239 yards. Before that, he put his name on the map as a rookie by averaging 4.6 yards per carry.

The Cardinals figure to be active this offseason, but a David Johnson release won’t be on the agenda. In a radio interview on Friday morning, GM Steve Keim ruled out the possibility of cutting the running back. 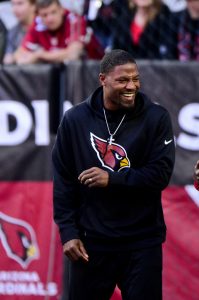 “Cutting him is not an option,” Keim told 98.7 FM (Twitter link via Darren Urban of the team website).

It’s hard to argue with Keim’s take. Johnson’s contract – worth $13MM per year on average – offers no real escape at the moment. Cutting him this offseason would result in a $16.2MM dead money hit. On the roster, he carries a $14.1MM cap charge.

Johnson was once one of the league’s most feared running backs. Unfortunately, ankle and back injuries have held him back in recent years and the Cardinals responded by slashing his workload in 2019 and acquiring Kenyan Drake in a surprising midseason deal. Drake is scheduled to reach free agency in March, but regardless of how it shakes out, Johnson figures to be a part of the team next year.

“You can’t just have one back,” Keim noted.

Johnson missed a big chunk of time in the middle of the season before returning in Week 13. Then, between Weeks 13 and 16, he was handed the ball just four times. He finished out with less than four yards per tote for the second straight season but, on the plus side, he was still contributing as a pass-catcher.

Johnson inked a three-year, $39MM deal with the Cardinals in 2018 that takes him through the 2021 season. Whether he makes it to the final year of that deal will be dependent on his health and Drake’s effectiveness (if re-signed). Next year, the Cardinals will have the option of shedding Johnson’s scheduled $12MM charge and saving $9MM against a much more palatable $3MM.

Bengals wide receiver A.J. Green had been expected to return to game action in Week 10 against the Ravens, and head coach Zac Taylor even confirmed as much this morning, per Paul Dehner of The Athletic (Twitter link). However, Green didn’t practice Wednesday after experiencing ankle swelling during Cincinnati’s walkthrough and is now considered day-to-day, tweets Tom Pelissero of NFL.com, so it’s unclear if Green will still be ready for Baltimore. Green hasn’t played a single snap this year after suffering ankle damage during the preseason. When he does return, he’ll be catching passes from a new quarterback (rookie Ryan Finley) as he makes his case for an extension.

Here’s more on the injury front:

Amidst a deluge of trade speculation concerning second-year QB Josh Rosen, the Cardinals opted against making Rosen available to the media last week. But Rosen himself spoke to SI.TV (video link) about his uncertain status with the club, and while he did not disparage Arizona, he certainly sounded frustrated. He said, “I definitely understand the situation. I mean, it’s annoying but, like, it is what it is. Football’s a business, and I definitely respect the higher-ups and their decisions. . . . Whatever decisions are made, it’s my duty to prove them right if they keep me, and prove them wrong if they ship me off” (h/t Mike Florio of Pro Football Talk).

Now for more from around the NFC:

POLL: Should the Cardinals Explore A David Johnson Trade?

As the Cardinals have started the season 1-4 and are in the midst of a rebuild, there’s been a lot of trade rumors surrounding the team. Arizona is reportedly shopping former first-rounders Deone Bucannon and Haason Reddick, and now a more surprising name has emerged as a potential trade candidate.

Over the course of the week, David Johnson‘s name has been a frequent subject of internet discussion, with many speculating the team could look to deal him as they aren’t in win-now mode. The Eagles, who have also been linked to Le’Veon Bell after Jay Ajayi‘s ACL tear, have been suggested as a possible destination for Johnson.

Johnson has been having a down-year by his standards, and Cardinals offensive coordinator Mike McCoy has taken a lot of flack for not getting Johnson involved more. Johnson thrived in now-retired coach Bruce Arians’ system, where he was often utilized as a receiver. McCoy’s scheme has turned him into more of a between-the-tackles runner, and it hasn’t been a great fit.

Despite the scheme issues, it would still be shocking if Johnson was dealt. Just last month, the team signed him to a huge three-year extension worth $39MM. As former NFL agent and current CBS Sports analyst Joel Corry points out, it wouldn’t make much sense for the team to pay Johnson a massive $12MM signing bonus then deal him months later (Twitter link).

It also wouldn’t seem to make much sense for the Cardinals to trade away the offense’s best weapon as they seek to develop Josh Rosen. Trading away Johnson would take away Rosen’s safety blanket and make life much tougher for the promising rookie.

But as long as the Cardinals continue to lose and until McCoy succeeds in getting Johnson more involved, rumors will likely continue to swirl. It’s likely the Cardinals would seek high draft picks if they did decide to flip him, and it’s unclear if any team would even be willing to play the necessary price.

What do you think? With the team not winning anything this year, should the Cardinals at least listen to offers on Johnson? Vote in the poll below and weigh in down in the comments!