Former Chiefs head coach and longtime NFL assistant Gunther Cunningham has died at the age of 72. Cunningham, who most recently served as a senior coaching assistant with the Lions, was beloved around the league. 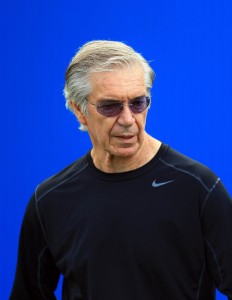 “Gunther Cunningham will forever be remembered as one of the great men of our game,” the Lions said in a statement. “He left a lasting impact on every person who was fortunate enough to work alongside him during his more than 47 years as a coach – including 34 years in the National Football League, the final eight of which were spent here in Detroit. Our organization is truly honored and proud to have been included in his distinguished coaching legacy. We extend our heartfelt sympathies to his wife, René, and their entire family.”

Cunningham began his coaching career at the University of Oregon in 1969 and moved to the pro ranks in 1982 with the Lions. In 1995, he got his big break when the Chiefs appointed him as their defensive coordinator. Four years later, he was elevated to the head coaching position, where he went .500 over two years before being fired. Along the way, he also had stops with the Colts, Titans, Chargers, and Raiders.

Years later, Cunningham would return as the Chiefs’ DC and took on the same job with the Lions between 2009-2013.

We here at PFR extend our condolences to Cunningham’s loved ones.

Gunther Cunningham is leaving the Lions, but not for another coaching gig. The former defensive coordinator is joining Pro Football Focus as their new Director of Football Oversight, according to a team press release.

“We are thrilled to add to our PFF family one of the true legends of defensive football,” Pro Football Focus Owner and NBC color analyst Cris Collinsworth said in a statement. “Gunther Cunningham is such a unique coach and person. He has always connected with his players in such a deep personal way, and his aggressive style of defense has always made him a player and fan favorite. The rare aspect of Gunther’s career is how this old school coach has embraced today’s data analytics. It is the blending of that traditional football acumen with modern technical expertise that makes Gunther such a perfect fit for PFF.”

Cunningham has 48 years of coaching experience under his belt between the NFL and college. That resume includes two seasons as the Chiefs’ head coach and 15 as a defensive coordinator. He has spent the past eight seasons with the Lions with different titles, including assistant head coach/defensive coordinator and senior coaching advisor.

New Lions defensive coordinator Teryl Austin has big shoes to fill, replacing 32-year NFL veteran Gunther Cunningham. Austin, 21 years Cunningham’s junior, just landed his first coordinating job at the pro level, and is expected to employ a more blitz-heavy defense than his predecessor, according to Justin Rogers of MLive.com. “We’re going to probably stay more in a 4-3, in terms of what we have personnel-wise,” said Austin. “Our pressures with our linebackers will be coming from different angles, different things that way, instead of a per se ‘rush linebacker’ that I’m used to dealing with.” Rogers said the odds do not favor the team pursuing an aforementioned rush linebacker in the draft or free agency, noting all three of the team’s starting linebackers from last season are under contract for 2014.

Other notes from the Motor City: