Dean Pees‘ retirement didn’t last long. After calling it quits on January 1 following a six-year run in Baltimore, the veteran coach is set to join the Titans as the team’s defensive coordinator, Josh Wolf of The Tennessean writes. 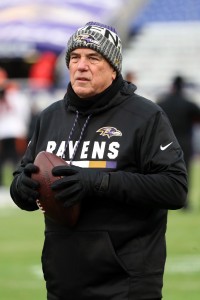 In 2017, Pees’ Ravens recorded the most turnovers in the league but suffered several late-game collapses toward the end of the season that ultimately kept them out of the playoffs. Pees served as Baltimore’s defensive coordinator from 2012-2017, and he earned a Super Bowl ring in that position in 2012.

Pees entered coaching in 1979, serving as the University of Findlay’s defensive coordinator. After stints at several colleges over the next two decades, Pees made the jump to the NFL when he joined the Patriots in 2004. After a long run in New England, he took over as defensive coordinator in Baltimore. Pees’ son Matt will join his father on the Tennessee coaching staff, where he’ll work as a quality control coach.

The Titans defense finished middle of the pack in 2017, while also allowing the eighth most passing yards. Pees’ opportunistic schemes could improve a unit that registered the 16th most turnovers.