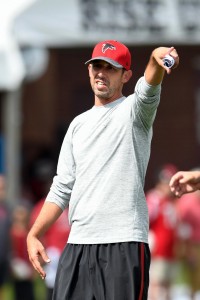 Jets head coach Todd Bowles wasn’t blindsided by former offensive coordinator Chan Gailey‘s retirement. The second-year coach told Darryl Slater of NJ.com that Gailey had told him last offseason that 2016 would be his final season in the NFL. Bowles acknowledged that this made it easier to plan for the upcoming offseason, and he refuted suggestions that Gailey’s impending retirement had a negative impact on the Jets’ offense.

“No, I respect Chan to the utmost,” Bowles said. “He doesn’t do anything without thinking about it — and for a reason. And I respect his privacy. I won’t even go into that. But I love him to death. I still do. I’m happy for him. He wanted to go out his way, and he did.”

So who will replace Gailey as the team’s new offensive coordinator? Bowles is apparently leaning towards one candidate, but he wouldn’t reveal who that is.

“I’m pretty sure where I’m going,” Bowles told Connor Hughes of NJ.com. “I can’t say anything. When we hire somebody, I will let you know.” 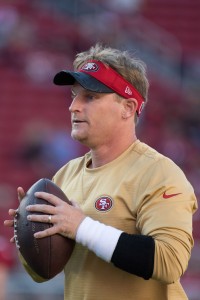 Currently the 49ers’ linebackers coach, Tarver hasn’t been connected with any of the DC jobs this offseason. But the 49ers did consider him for their DC position, one that eventually went to Jim O’Neil, last year.

Tarver spent three seasons as the Raiders’ DC from 2012-14, and the 42-year-old assistant served in a lengthy previous 49ers stint in the 2000s. While affiliated with two NFL teams and three colleges in 20 years of coaching, Tarver has never coached outside of northern California. However, he did work with current Redskins GM Scot McCloughan during the initial 49ers stint.

He adds to the list of prospective Redskins DCs, with Ryan and Mike Pettine also residing on that list. Tarver’s Raiders defenses ranked 18th, 22nd and 21st, respectively, from 2012-14 during the Dennis Allen regime.

Free agent linebacker Lamarr Woodley offered scathing reviews of two of his former defensive coordinators, the Cardinals’ James Bettcher and ex-Raiders assistant Jason Tarver (now with San Francisco), on the latest edition of his podcast (per Kent Somers of the Arizona Republic).

Woodley didn’t mention either Bettcher or Tarver by name, but given that he only spent one year with both teams, it’s clear he was referring to them.

He continued, “They thought we were like Madden players. They’d draw something up and on paper it looked good, but the players still have to go out there and run it. Those guys didn’t really listen to their players. They wanted to do it their way and their way only.”

Woodley also ripped into Bettcher for his game plan in the Cardinals’ 49-15 loss to Carolina in the NFC championship.

“It wasn’t because we had bad players. No, our defensive coordinator he didn’t have the common sense to talk to his players to make the adjustments. Because he just wanted to do things his way those are the results we got, bottom line,” he said.

Woodley didn’t play in the title round (or any Cardinals game beyond Nov. 22) because he was on injured reserve. The 31-year-old appeared in just 16 contests over the previous two seasons with the Raiders and Cardinals, combining for 15 tackles and a sack. Woodley was a far more productive player from 2007-13 in Pittsburgh, with which he piled up 58 sacks.

And now the latest from the AFC West: 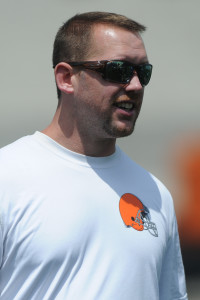 After being turned down by Texans linebackers coach Mike Vrabel, the 49ers have moved onto other defensive coordinator candidates, including one internal option. According to Albert Breer of the NFL Network (Twitter link), San Francisco is considering its own linebackers coach, Jason Tarver, along with Ravens linebackers coach Don Martindale, for the DC position. 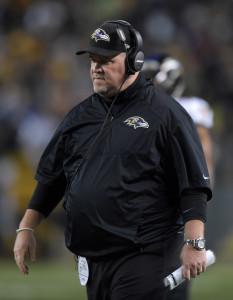 Neither Tarver nor Martindale appear to have any previous overlap with Chip Kelly, so the new 49ers head coach isn’t simply targeting coaches with whom he has worked before. With the two linebackers coach entering the mix for the Niners’ DC job, it looks increasingly unlikely that Eric Mangini will be retained.

A report a few days ago suggested that there was a “strong possibility” that Mangini, San Francisco’s incumbent defensive coordinator, would remain with the team. There may still a chance of that happening, particularly if Mangini is open to a demotion, but I think if he were going to keep his DC job, the club would’ve made that decision by now.

The defensive coordinator position under Kelly is viewed as a unique challenge, since his fast-paced offense means the defense will typically spend plenty of time on the field. From 2013 to 2015, Kelly’s Eagles ranked dead last in the NFL in time of possession each season. However, the Niners head coach downplayed those concerns this week, as Eric Branch of the San Francisco Chronicle writes.

“So all I learned is that they stand around better than we stand around. It’s still plays run. I’ve also never met a defense player that says, ‘Coach, I want you to possess the ball for the entire game so I don’t have to play.”