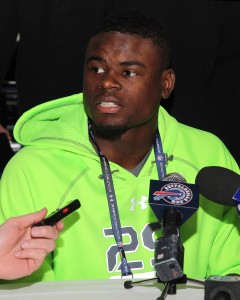 Huff, 25, has already enjoyed stints with two other clubs — the Ravens and Chiefs — this offseason. After Baltimore withdrew Huff’s restricted free agent tender, Huff signed on with Kansas City, but his tenure with the Chiefs didn’t last long. Kansas City cut ties with Huff after he spent fewer than three months on its roster.

A former fourth-round pick, Huff has primarily been a special teams player throughout his three-year NFL career, as he’s appeared in 41 games but only posted one start. Last season with the Ravens, Huff played in 11 games but saw action on just 32 defensive snaps. He played on nearly half of Baltimore’s special teams snaps, though.

Tampa Bay has boasted one of the league’s worst safety tandems for several years running, but the club made several additions to the position this offseason. The Buccaneers used a second-round pick on Texas A&M defensive back Justin Evans, and also signed free agent J.J. Wilcox to two-year pact.