END_OF_DOCUMENT_TOKEN_TO_BE_REPLACED

The Buccaneers have made a series of roster moves this morning. According to Greg Auman of the Tampa Bay Times (via Twitter), the team has signed cornerback Vernon Harris and offensive tackle Austin Albrecht. To make room on the roster, the team has waived-injured a pair of undrafted rookies, offensive tackle Cole Gardner and cornerback Maurice Fleming (via Auman on Twitter). 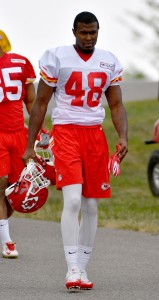 Vernon has the most “experience” among the four, although he’s yet to appear in an NFL game. The 2016 undrafted free agent out of Dartmouth joined the Chiefs last offseason, but he ultimately spent the entire season on the injured reserve. The Ft. Lauderdale, Florida native will have an uphill battle to make the Tampa Bay roster, as he’ll have to compete with Josh Robinson, Robert McClain, Javien Elliott, and Cody Riggs for a reserve role.

Albrecht went undrafted in this past year’s draft after a standout career at Utah State. After initially serving in a backup role, he proceeded to make 25 straight starts to end his collegiate career. The 6-5, 300-pound lineman earned an Honorable Mention spot on the All-Mountain West team during his junior and senior season.

Both Gardner and Fleming joined the Buccaneers in early May. Following three seasons at Iowa, Fleming played at West Virginia during his senior year, compiling 43 tackles and one interception. Meanwhile, Gardner played three seasons at Eastern Michigan, serving mostly as an offensive lineman. He did appear in several games at tight end, compiling 10 receptions for 95 yards and a touchdown during his college career.