The Panthers have parted ways with one of the franchise’s top all-time pass rushers, according to Max Henson of Panthers.com, who tweets that the club has released Charles Johnson. The veteran defensive end had long been considered a candidate to accept a pay cut or be released this offseason. 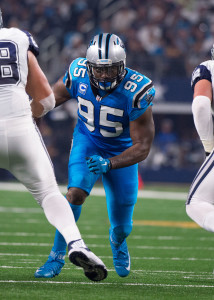 Johnson, 29, has been the Panthers’ most reliable pass rusher over the last several years, recording at least 8.5 sacks in every season from 2010 to 2014. However, his 2015 campaign was derailed by a hamstring injury, which landed him on the injured reserve list with the designation to return, sidelining him for nearly half the season.

In nine regular-season games in 2015, Johnson recorded just 12 tackles and a single sack, easily making it his least productive year since his rookie campaign. He showed flashes of his old self during the team’s postseason run though, picking up three playoff sacks. Overall, in his nine seasons in Carolina, Johnson racked up 63.5 total sacks, the second-most in franchise history, behind Julius Peppers (81.0).

Prior to his release, Johnson was set to count for more than $15MM against the Panthers’ cap in 2016, with a base salary of $10.75MM. By cutting him, Carolina clears Johnson’s entire salary from the team’s books, along with his $250K workout bonus, creating an even $11MM in cap savings.

According to Tom Pelissero of USA Today (Twitter link), the Panthers offered Johnson a pay cut before deciding to release him. Although Pelissero cautions not to rule out the possibility of a reunion between the two sides, I would imagine Johnson will explore the market and likely land elsewhere — if he finds that there’s not as much of a market for his services as he expected, perhaps the door re-opens for a return to Carolina at a reduced rate.

With Johnson no longer in the mix, the Panthers figure to address the defensive end position in free agency and/or the draft. Kony Ealy, who had three sacks during the postseason as well, looks ready to assume a full-time starting role on one side, and the club has some intriguing options behind him, but adding another starting-caliber player would be ideal, with Jared Allen retiring.

As Pro Football Talk notes (via Twitter), one intriguing scenario for the Panthers could be a return to North Carolina for Mario Williams, who was recently cut by the Bills.