Bills wide receiver Sammy Watkins suffered a broken small bone in his foot and had a screw inserted, a source tells Ian Rapoport of NFL.com (via Twitter). The star is expected to be ready for training camp, Rapoport adds. 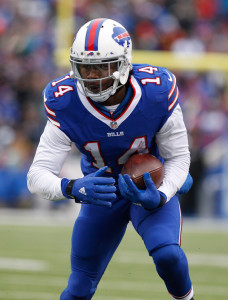 Watkins has been banged up in the past but, for the most part, has pushed himself to stay on the field. After having a perfect attendance record in his rookie season, the wide receiver was forced to sit out three games in 2016. The good news, of course, is that Watkins supposedly won’t miss any regular season time from this injury, provided that there are no further complications or aggravations of the injury.

This is the second bad piece of news for the Bills today. Just hours ago, the team announced that promising first-round pick Shaq Lawson will be forced to undergo shoulder surgery in order to avoid his issue getting worse.

Last season, Watkins hauled in 60 passes for 1,047 yards and nine touchdowns in his shortened season.