Arian Foster To Be Ready For Training Camp?

Free agent running back Arian Foster is expected to be healthy in time for training camp, a source tells Jeremy Fowler of ESPN.com. That news jibes with a report earlier this month that indicated that although Foster could have passed a physical in early June, he would wait until the end of July to begin working out for teams, hoping that extra time would help ensure that he was in “football condition.” 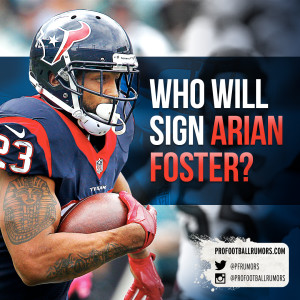 According to Fowler, three teams have recently expressed interest in Foster, who is currently assessing possible fits as he gets healthy. It’s unclear exactly how “recently” Fowler is referring to, but the only club that has officially met with Foster this offseason is the Dolphins, who did so back in March. Miami, however, reportedly views Foster as more of a fallback option, a safety net in the event that its young crop of running backs falter.

Another AFC East club, the Patriots, apparently had “preliminary interest” in Foster earlier this year, but little came of that reported intrigue Still, Foster should be able to find a market for his services if he can prove he’s fully recovered from an October Achilles tear, and I recently listed eight clubs that could be sign the veteran runner, including the Raiders, Broncos, and Chargers.

Foster, 29, is still capable of putting up results when he is on the field. He accumulated 6,472 rushing yards during his seven years as a Texan, and earned three consecutive Pro Bowl nods from 2010 to 2012, averaging about 1,900 all purpose yards and 16 touchdowns in those seasons. But Foster was limited to 25 regular-season games from 2013 to 2015, and injuries, his age, and his increasing cap number resulted in the Houston releasing him this spring.

2 comments on “Arian Foster To Be Ready For Training Camp?”