The Bears have signed running back Joique Bell, as NFL reporter Rand Getlin tweets. Bell met with Chicago late this morning and it didn’t take long for the two sides to shake hands on a deal. 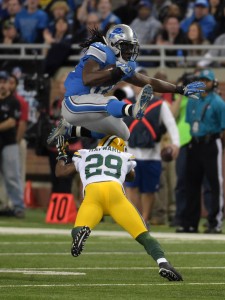 Bell has been on the market since he was released by the Lions in February. Prior to his release, the tailback turned down a pay cut proposal. In hindsight, Bell might have been too confident in the strength of his market. Regardless, Bell is now back in the game and back in the NFC North. The veteran will have an opportunity to exact revenge on his old team this Sunday when the Bears face off against Detroit.

Bell, 30, averaged just 3.5 yards per carry last season, the lowest of his career. However, he has a history of productivity and has shown that he can be an effective runner and pass catcher when given the opportunity. Before Theo Riddick was doing damage as a pass-catching back in the Lions’ offense, it was Bell who was making things happen with his hands. In his first two seasons with Detroit, Bell averaged 52 catches for 516 yards.

Bell will likely serve as a reserve tailback behind Jordan Howard while starter Jeremy Langford heals up from a ankle injury. Ka’Deem Carey is also dealing with a hamstring injury and his status going forward is uncertain.