The Broncos have released running back Ronnie Hillman, tweets Mike Klis of 9NEWS. 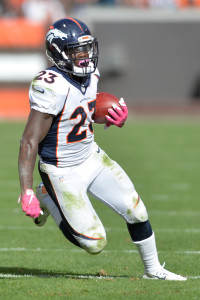 Hillman, a 2012 third-round pick, paced Denver’s running backs in offensive snaps (524) during the 2015 regular season. He also led the team’s rushers in starts (11), attempts (207), yards (863) and touchdowns (seven). Hillman wasn’t exactly integral during the Broncos’ Super Bowl-winning playoff run, though, as he rushed for 54 yards on 32 carries in their three victories. C.J. Anderson had as many carries (54) in that stretch as Hillman did yards, and the former racked up between 72 and 90 yards in all three games.

Denver will save $1.4MM of the $2MM contract it handed Hillman this offseason.