The Dallas Police Department has closed its investigation into Aqib Talib, and has concluded that the Broncos cornerback did in fact shoot himself, as Rebecca Lopez of WFAA tweets. A self-inflicted wound had been the prevailing theory ever since Talib was involved in a firearm incident in June. Talib will not face charges. 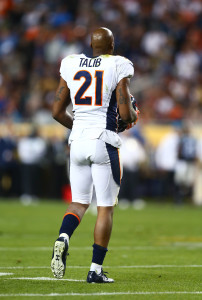 While one recent report indicated that Talib would not face league discipline for his involvement in the matter, Cameron Wolfe of the Denver Post reports (Twitter link) that the NFL is still reviewing the shooting. In June, Adam Schefter of ESPN.com reported that league punishment is coming for the cornerback. Commissioner Roger Goodell is not a fan of firearms, and the fact that Talib was apparently intoxicated — and has a history with weapons – could factor into any disciplinary decision.

On the night of the incident, Talib reportedly told police he was at a park when he was shot, but the police were investigating the evening in full. “Everything was a blur and I was too intoxicated to remember what happened,” said Talib at the time. Authorities never recovered the weapon used in the shooting, and few (if any) witnesses were talking about what happened.