In advance of March 9, the start of free agency in the NFL, Pro Football Rumors will detail each team’s three most glaring roster issues. We’ll kick off this year’s series with the Buffalo Bills, who finished 7-9 in 2016 and have now gone a league-worst 17 seasons without a playoff berth.

The Bills have shuffled through seven different full-time head coaches since their most recent postseason trip, and they’re now looking for yet another as a result of Rex Ryan‘s late-December dismissal. Beleaguered general manager Doug Whaley, who’s leading the search, has so far targeted interim head coach Anthony Lynn, Cardinals offensive coordinator Harold Goodwin and three D-coordinators – Sean McDermott (Panthers), Vance Joseph (Dolphins) and Kris Richard (Seahawks) – as Ryan’s potential successor. Regardless of which candidate Whaley hires, the fifth-year GM will have to make major offseason improvements to a roster that ranked a below-average 19th in the league in DVOA in 2016. 1.) Make a decision on Tyrod Taylor‘s future: Lackluster quarterback play has been the main staple in Buffalo during its long run of failed seasons, but Taylor has been effective relative to the dreck that preceded him.

In two seasons and 29 games as a starter, the ex-Ravens backup has completed 62.6 percent of passes, tossed 37 touchdowns against 12 interceptions and averaged 7.4 yards per attempt. The 27-year-old has also emerged as the preeminent running quarterback in the league, having piled up 560-plus yards in back-to-back seasons (on a lofty 5.8 per rush) to pair with 10 more scores.

Despite the success Taylor has had at a meager cost, the Bills are planning to move on from him by March 11, the deadline to pick up the $15.5MM option bonus in his contract. By declining that option, the Bills would escape Taylor’s deal – which they awarded him last August – and its remaining guaranteed money ($30.75MM).

Jettisoning Taylor would again put Buffalo on the hunt for a starting signal-caller, though, as backup EJ Manuel will be a free agent (and has no business starting even if he does re-sign) and third-stringer Cardale Jones is nowhere near ready to take the helm. The premier names whose statuses are in limbo entering the offseason are Kirk Cousins, Tony Romo and Jimmy Garoppolo, but none look like realistic possibilities for the Bills. Cousins is likely to either ink a long-term deal with the Redskins or get the franchise tag; Romo, whom the Cowboys could cut, should have more enticing choices than Buffalo; and it’s difficult to imagine the Patriots trading Garoppolo to an AFC East rival. The Pats did send one of Tom Brady‘s previous backups, Drew Bledsoe, to the Bills in 2002 for a first-round selection, but doing that enabled the club to rid itself of Bledsoe’s contract and land a valuable pick for a declining player. The 25-year-old Garoppolo’s best days might be ahead of him, and New England could easily keep him next season at an $820K salary.

After Cousins, Romo and Garoppolo, the potential choices are much more flawed. There’s the Bears’ Jay Cutler, a release candidate, though he’s coming off a bad and injury-plagued year. Chiefs backup Nick Foles is also a cap casualty in waiting, but he hasn’t been any kind of an answer as a starter aside from a fluky 2013 in Philadelphia. Free agents-to-be like Brian Hoyer and Mike Glennon have been career mediocrities, too, while counting on Steelers backup Landry Jones or Bears reserve Matt Barkley would be a sizable risk. The same is true of Bengals No. 2 and trade candidate A.J. McCarron.

Of course, Buffalo could also use a high draft choice – the team is set to pick 10th – on a signal-caller and add a veteran No. 2 (someone like Josh McCown, ex-Bill Ryan Fitzpatrick or Shaun Hill, among others) as competition. The Bills won’t be in position to select the draft’s No. 1-rated quarterback prospect, North Carolina’s Mitch Trubisky, but Bleacher Report’s Matt Miller has Whaley taking Clemson’s Deshaun Watson at 10th overall. The mobile Watson is the most pro-ready QB in this year’s class, opines Miller, who points out his familiarity with ex-Clemson star and No. 1 Bills wideout Sammy Watkins. 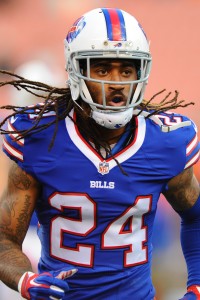 2.) Rebuild the defense: The Bills just concluded their second straight subpar defensive season, one in which they ranked 16th in scoring, 19th in yardage and 26th in DVOA. Three of their key defenders – cornerback Stephon Gilmore and linebackers Zach Brown and Lorenzo Alexander – are now on schedule to hit free agency.

Gilmore regressed in 2016, but he’s still likely to sign a mega-deal with someone. The Bills are going to have to weigh whether to give him that contact, slap the $14.927MM franchise tag on him or say goodbye. Brown, meanwhile, seemingly waved goodbye to the Bills on Thursday; they may have a ready-made successor to him in 2016 second-rounder Reggie Ragland, who missed the season with a torn ACL. Alexander, a soon-to-be 34-year-old journeyman who stunningly racked up 12.5 sacks this season (he came into 2016 with nine) en route to a second-team All-Pro bid, has indicated his willingness to re-sign will depend on the Bills’ coaching hire. Elsewhere, safety Aaron Williams is contemplating retirement because of neck issues, and stalwart D-tackle Kyle Williams could also walk away.

There’s clearly change on the horizon for the Bills’ defensive personnel, as evidenced above, and it’s also possible their next head coach will switch from the 3-4 base they ran under the Ryans (Rex and Rob) and coordinator Dennis Thurman to a 4-3. Their first-rounder from last year, former Clemson standout Shaq Lawson, is hoping to return to his college position – 4-3 defensive end – after a low-impact rookie year as a 3-4 outside linebacker. Lawson joins Marcell Dareus, who also wasn’t wild about the previous regime’s defensive scheme, Jerry Hughes, Adolphus Washington, Preston Brown, Ronald Darby, Nickell Robey-Coleman, Corey Graham and Ragland as Bills defenders who look like strong bets to have prominent roles in 2017. The rest is up in the air.

3.) Bolster the receiving corps: Although eminently talented, Watkins has been extremely banged up over the past couple years. A foot injury kept him off the field for half of 2016, and he underwent another surgery to address it this week. Even if Watkins is healthy next season, he’ll need more help.

The Bills’ second-best receiver, pending free agent Robert Woods, will test the market after a fourth straight quality campaign. Marquise Goodwin, Justin Hunter, Brandon Tate and the once-retired Percy Harvin are also without contracts going forward. That leaves the Bills with Watkins and Walter Powell, who caught 14 passes in 2016, as their current one-two punch at receiver. Nobody from the Goodwin-Hunter-Tate-Harvin contingent is a world-beater, either, so the Bills are going to have to venture into free agency for a veteran complement(s) to Watkins. There will be several to choose from – including Alshon Jeffery, Terrelle Pryor, Pierre Garcon, Kenny Britt, Kamar Aiken, Kendall Wright, Brandon LaFell, Ted Ginn and Dontrelle Inman – but productive pass catchers don’t come cheap in free agency. It’s also probable Whaley will turn to the draft (not necessarily in Round 1), where Western Michigan’s Corey Davis could be a possibility at No. 10. Of course, that would mean using a first-rounder on a receiver just three years after Whaley essentially spent two on Watkins.