The Cardinals have signed veteran kicker Phil Dawson, Adam Schefter of ESPN.com tweets. Kent Somers of AZCentral.com reports (via Twitter) first reported that the two sides were talking. It’ll be a two-year deal for the special teamer, according to Darren Urban of the Cardinals website (via Twitter). 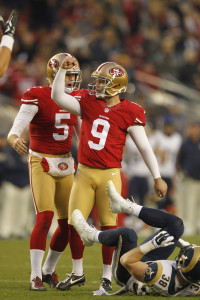 Dawson, 42, represents a more experienced option than 26-year-old Chandler Catanzaro, who is now a free agent (the Cardinals non-tendered him yesterday). Dawson hadn’t missed a game during his four-year tenure with the 49ers, and despite getting up there in age, he hasn’t shown too many signs of decline. The veteran connected on 85.7-percent of his field goals last season, and he only missed one extra point in 34 attempts.

Meanwhile, Catanzaro took a step back in 2016. After connecting on 90-percent of his field goals the previous year, the former undrafted free agent saw the number drop to 75 percent this past season. The kicker also connected on 91.5-percent of his extra points – a mark that Dawson has reached in each of the past 11 seasons.

Dawson ranked sixth on our listing of the best available kickers.