The Colts have signed former Texans outside linebacker John Simon to a three-year deal, a source tells ESPN.com’s Field Yates (on Twitter). He’ll earn $13.5MM deal with another $3MM in escalators, Tom Pelissero of USA Today tweets. Simon will make $6MM in the first year of the deal, Albert Breer of The MMQB tweets. 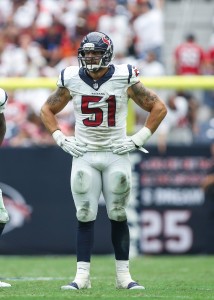 J.J. Watt, Jadeveon Clowney, and Whitney Mercilus get the attention in Houston, but Simon is a quality edge rusher in his own right. Now, he might get some more attention for himself. He’s certainly in for a pay bump. The Texans have now lost three significant free agents in cornerback A.J. Bouye, safety Quintin Demps, and John Simon.

Simon, who can play at linebacker or defensive end, was ranked as our third-best free agent edge defender entering this week and made my Top 50 Free Agents list which ranked guys based on projected earnings.