The Colts have announced the re-signing of tight end Jack Doyle to a three-year deal. The pact is worth $19MM and includes $2MM in incentives, according to Mike Garafolo of NFL.com (Twitter link). Half of the $19MM ($9.5MM) is guaranteed, tweets ESPN’s Adam Caplan. 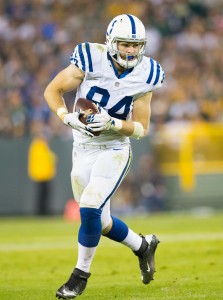 Had Doyle gotten to free agency, he would have been among the most sought-after tight ends on the open market. In a breakout 2016 campaign, the 27-year-old Doyle posted across-the-board career highs with 59 catches, 75 targets, 584 yards and five touchdowns. During the previous three seasons of his career, Doyle combined 42 receptions, 209 yards and three TDs.

Doyle now joins Dwayne Allen as one of two well-compensated Colts tight ends. Allen nearly reached free agency last offseason, but the Colts stopped that from happening with a four-year, $29MM offer. The fact that Doyle won’t hit the market this year should increase the demand for free agency’s other top tight ends, Martellus Bennett and Jared Cook, and aid them in their quests to land raises.