The Titans will sign safety Johnathan Cyprien today, according to Adam Schefter of ESPN.com (on Twitter). It will be a four-year, $25MM deal for the defensive back, reports Tom Pelissero of USA Today (via Twitter). The reporter adds that Cyprien will make $7MM next season. 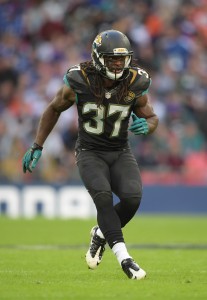 Jaguars fans are often frustrated by Cyprien’s play, but he turned one of his best seasons to date in 2016. I had him ranked as the No. 31 free agent on my Top 50 list after he finished out with 126 total tackles, one sack, and four pass deflections. Pro Football Focus gave him a 87.8 overall grade – the best of his career – and placed him No. 7 among all safeties, just ahead of Chiefs star Eric Berry.

In Tennessee, Cyprien will pair with Kevin Byard in the back end, and given that Cyprien is a defender who plays closer to the line of scrimmage, Byard will need to excel at deep safety. Cyprien is an excellent run defender, but playing against the pass has never been his strong point.

With Cyprien’s signing, Rashad Johnson is presumably not in the Titans’ plans going forward.