The Colts have taken the top remaining free agent off of the board. Johnathan Hankins has agreed to terms on a three-year deal worth up to $30MM, a source tells Adam Schefter of ESPN.com (on Twitter). The defensive tackle gets $10.5MM in the first year with $15.9MM guaranteed overall. Of course, further details on the deal’s cash flow will give us a better grip on the contract’s true value. 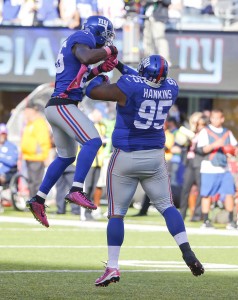 The incumbent Giants had a four-year, $28MM proposal on the table for Hankins. On the surface, it seems like he got significantly more from Indianapolis. If he serves the complete term of the deal, he’ll be eligible for free agency again at age 28. Depending on how he performs, that could set him up for a massive multi-year payday in the future. In the interim, he netted a decent sized multi-year deal at a time when it seemed like he might have to settle for a one-year pact.

In terms of per year average, Hankins’ deal puts him eighth amongst all 4-3 defensive tackles, behind Ndamukong Suh, Fletcher Cox, Calais Campbell, Malik Jackson, Gerald McCoy, Michael Brockers, and Geno Atkins. The Giants were looking to pay him like Nick Fairley (four years, $28MM with $14MM guaranteed), but he went one level up while taking a bit less in per-year guarantees.

After finishing dead last in DVOA in 2016, the Colts were determined to improve the defensive line. After acquiring Hankins, Jabaal Sheard, Sean Spence, John Simon, Barkevious Mingo, and others, the Colts are certainly in better shape.

Meanwhile, the Giants will have to figure out a way to replace the 25-year-old. At this point, the best free agent interior linemen are long gone and the draft doesn’t offer a ton of high end defensive tackles. Alabama defensive lineman Jonathan Allen is projected to come off of the board well before the Giants’ turn at the podium and that leaves second-tier guys like Malik McDowell (Michigan State), Caleb Brantley (Florida), and Larry Ogunjobi (Charlotte) and not all of those players are scheme fits for the G-Men. On the open market, Jared Odrick stands as the best available DT.