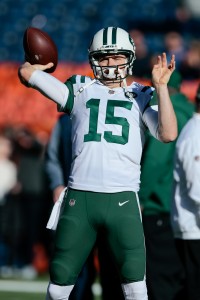 McCown exited Sunday’s loss to the Broncos with a broken hand. With just three games to go and zero chance of making the postseason, shutting the quarterback down was the only choice left for the Jets.

The Jets have exceeded all expectations this year and so has the 38-year-old McCown. McCown threw for a career-high 18 touchdowns this season and matched a personal watermark with 13 starts. His No. 22 ranking among Pro Football Focus’ top quarterbacks doesn’t portray him as Pro Bowl material, but few expected the aging veteran to do that well given the team’s major gaps on offense.

The Jets are expected to turn things over to the younger Bryce Petty, who struggled in relief of McCown. There’s also the possibility that we’ll finally see 2016 second-round pick Christian Hackenberg get on the field. Bowles has previously dismissed the idea that Hackenberg could see reps despite his apparent lack of readiness. “This isn’t Triple-A,” Bowles told reporters in November. However, with three games left, now is as good of a time as any to find out what Hackenberg has to offer. If the Jets can definitively conclude that the Penn State product is not NFL material, then they can move on from him this offseason.