The Giants are going to have to look elsewhere for an offensive coordinator, because the Vikings don’t plan to open the door for Kevin Stefanski to leave the Twin Cities. 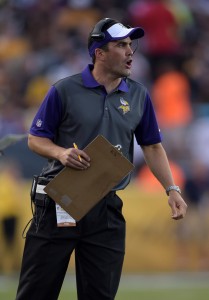 The Vikings denied the Giants permission to interview their quarterbacks coach for their OC job, Adam Schefter of ESPN.com reports (Facebook link). This comes even after the Vikings hired Eagles QBs coach John DeFilippo to replace Pat Shurmur.

Shurmur will now have to move on to other candidates to fill the OC post in New York. DeFilippo’s arrival in Minnesota certainly makes the franchise preventing Stefanski from becoming an OC interesting, especially after the Eagles granted DeFilippo permission for the Vikings interview, but the defending NFC North champions did interview Stefanski for their OC job and clearly don’t want to lose him just yet.

The Giants are also believed to be considering Eagles running backs coach Duce Staley and former Seahawks OC Darrell Bevell for the position. But with Stefanski’s ties to Shurmur, he was the logical favorite to be the new Big Blue HC’s right-hand man on offense.

No interviews have commenced for this position, with Stefanski apparently set to be the first. Meetings about this job figure to occur soon, though, now that Stefanski won’t be going to the Big Apple.

Stefanski, 35, has been with the Vikings for 12 seasons. He was already an assistant quarterbacks coach by age 27, when then-starting passer Brett Favre was 40, illustrating how the franchise views him. Stefanski’s moved from tight ends coach to running backs instructor to QBs coach over the past four years, and it looks like he’ll stay on for a second season developing Minnesota’s signal-callers — now under DeFilippo’s direction.

Shurmur and Staley have an extensive history, with the former running back being a player during Shurmur’s first Philadelphia stint and then a coach during his second, whereas Shurmur and Bevell have never coached on an NFL staff together. However, Shurmur looks to be seeking an OC with experience coaching quarterbacks, and Staley has yet to serve in that role since breaking into the coaching ranks. Former Cardinals OC Harold Goodwin has also been mentioned as a candidate.

Staley will require Eagles permission to interview with the Giants, whereas Bevell and Goodwin are coaching free agents.