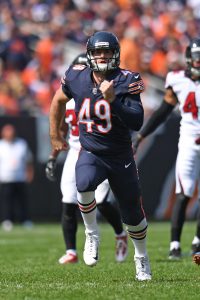 DePaola, 31 in July, spent three seasons with the Buccaneers before hooking on with the Bears last season. The signing leaves the Bears without a long snapper for the moment, but Patrick Scales, who was non-tendered, could be brought back to fill that hole.

DePaola’s deal is uncharacteristically high for a long snapper, but coach Jon Gruden isn’t afraid to go against the grain. Gruden has vowed to “‘throw the game back to 1998” and he took a step in that direction this week by signing fullback Keith Smith to a two-year, $4.2MM deal.