The Raiders are releasing wide receiver Michael Crabtree, according to ESPN.com’s Adam Schefter (Twitter link). With Crabtree out of the picture, a source tells Schefter that there is a “high probability” of wide receiver Jordy Nelson landing in Oakland (UPDATE: Nelson has signed with the Raiders). 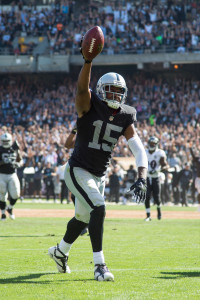 There have been whispers of Crabtree’s exit from Oakland for several months. At one point, Jon Gruden seemed to indicate that Crabtree would be back with the team in 2018. Such talk, apparently, was premature. The Raiders will move on from Crabtree’s $7MM salary and are likely to fill that void with Nelson.

Last season, Crabtree posted his worst season as a Raider, managing only 58 reception and 618 yards in 14 games. In January, his $7MM salary seemed a bit rich given his down year, but it’s not so crazy when compared to some of the free agent deals signed by other receivers this year.

Take Marqise Lee‘s new contract with the Jaguars, for example. He can earn a maximum of $38MM over the course of his four-year contract. Even if his “true” average annual value falls short of $9.5MM, it’s still a good indicator of what Crabtree can expect to get in free agency. On the other hand, many of this year’s wide receiver voids have already been filled.