We’re still waiting for Rob Gronkowski‘s decision on his football future, but we won’t have to wait much longer. The tight end says he’ll make the call “in a week or two,” (via Jim Trotter of NFL.com). 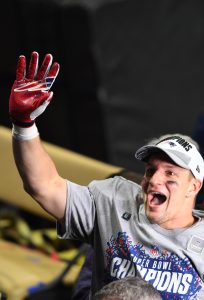 When pressed about his plans, Gronk said that Sunday night was dedicated to celebrating the Super Bowl victory with his teammates. He’s been wrestling with retirement for a while now, however, and that’s partially due to his injury history. He emerged from Super Bowl LIII without suffering further injury and Tom Brady swears that he’ll be back in 2019 – both of those factors may push Gronk towards returning for the 2019 season.

In 2018, Gronkowski played through Achilles tendonitis and a bulging disc in his back. He has also been forced to suit up with a Barry Bonds-type arm brace to protect his left elbow.

Gronkowski is due a $9MM base salary next season, the last year of his current deal. It has been rumored that Gronkowski is eyeing a post-football career that includes acting and/or something fitness-related, but those opportunities should still be there for him after the ’19 campaign.

The 29-year-old (30 in May) was limited to just 47 catches for 682 yards and three touchdowns in 13 games season. The Rams did their best to keep a lid on him on Sunday, but he finished out with six catches for 87 yards, including a crucial red zone catch that led to the game’s only TD.