And then there was one. Malik Jackson will sign with the Eagles, according to Josina Anderson of ESPN.com (on Twitter). Word of Jackson’s impending deal comes moments after we learned the Eagles and Packers were the leading contenders to sign the defensive tackle. 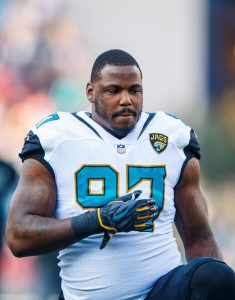 When all is said and done, it will be a three-year, $30MM deal, according to Adam Schefter of ESPN.com (on Twitter). There’s no word yet on the guarantees or pay structure, but it sounds like a solid deal for both sides.

Jackson joined the Jaguars on a six-year, $85.5MM in 2016. Then, last week, the Jaguars released him in a cost-cutting measure. His release did not come as a huge surprise – Taven Bryan supplanted him down the stretch of the 2018 season and his contract precluded the club from trading him.

Last year, Jackson notched just 32 tackles and 3.5 sacks, with Pro Football Focus ranking him 85th among 112 interior defenders. However, he was a Pro Bowler as recently as 2017 and enjoyed a solid first season in Jacksonville. Jackson also racked up 14.5 sacks across his final three years in Denver, despite only spending one of those campaigns as a full-time starter.

With Jackson, the Eagles have successfully upgraded their defensive front after trading Michael Bennett to the Patriots.