The Steelers have agreed to trade tackle Marcus Gilbert to the Cardinals, a source tells Adam Schefter of ESPN.com (on Twitter). In return, the Steelers will receive a draft pick late in the sixth round. 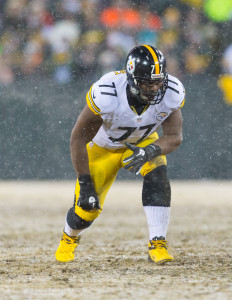 The Steelers have been working the phone lines in an attempt to move Gilbert and they found a taker quickly after word broke on Friday. Gilbert, 31, has missed 23 regular season games over the last three years, but he can be a difference-maker for Arizona if he stays healthy and out of trouble with the league.

Since 2011, Gilbert has started in all but one of his games and he has graded out as a top 20 tackle in Pro Football Focus’ rankings in the past. Even in 2018, a down season marred by injury, Gilbert placed as PFF’s No. 41 tackle in the NFL.

The Cardinals’ offensive line was downright porous last offseason and the pocket failed to hold up around rookie quarterback Josh Rosen. Gilbert should help on that front, though the Cardinals – armed with the No. 1 overall pick – still have a ton of work ahead of them.