Dontrelle Inman is expected to sign with the Washington Football Team after he completes a physical on Monday, as Ian Rapoport of NFL.com tweets. The wide receiver will provide depth for a team that lost Kelvin Harmon to an ACL tear earlier this summer. 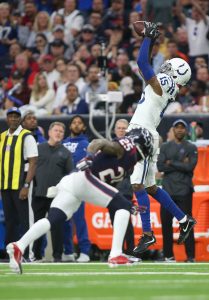 Harmon was set to feature as one of the Redskins’ top receivers, alongside Terry McLaurin and Trey Quinn. With Harmon no longer in the picture for 2020, Inman figures to slot somewhere alongside Cam Sims, Steven Sims Jr., and fourth-round pick Antonio Gandy-Golden on the depth chart. The status of Cody Latimer – who facing multiple charges following his May arrest – remains murky.

Inman made his name with the Chargers in 2016, catching 58 passes for 810 yards and four touchdowns in a breakout season. In recent years, he’s bounced around a bit. The Bolts traded Inman to the Bears midway through 2017, but he wasn’t able to regain his old form. In 2018, he inked a one-year deal with the Colts and went on to catch 28 passes for 304 yards and three scores in nine games. Last year, he signed deals with the Patriots and Chargers before circling back to the Colts. All in all, he finished 2019 with 12 grabs for 181 yards.