Today could be the dawn of a new era for the Saints, as Taysom Hill will get the nod at quarterback in place of the injured Drew Brees. Although some were surprised that New Orleans would turn to Hill instead of the considerably more experienced Jameis Winston, the Saints and head coach Sean Payton have made it clear that they see Hill as a long-term starter. 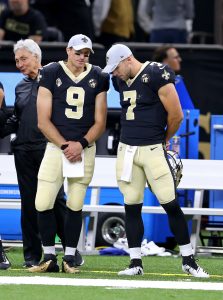 This offseason, the Saints and Hill agreed to a two-year, $21MM extension that keeps the 30-year-old under club control through the 2021 season. $16MM of that money was guaranteed at signing, and though the contract represents a big commitment for a backup QB/Swiss Army knife, it’s a modest payout for a starting signal-caller. And soon after the deal was signed, reports surfaced indicating that the club plans to give the job to Hill if Brees retires at the end of the 2020 campaign as expected.

So, one reason New Orleans is inserting Hill into the starting lineup is simply because it believes in him and thinks he provides the best chance to win in Brees’ absence. The other, according to Ian Rapoport of NFL.com, is that the Saints need to know what they have in Hill.

A source familiar with Payton’s thinking said, “Sean just wants to know,” when asked why the head coach is forging ahead with Hill. After all, Hill has thrown just 18 passes in his pro career, and Brees’ injury gives the Saints a perfect opportunity to see if their faith in the BYU product is justified. If Hill struggles, the club could pivot to Winston, and it could also save $5MM against the 2021 cap by cutting Hill after the season.

Some within the organization do not agree with Payton’s choice, per Adam Schefter of ESPN.com. Winston apparently has plenty of support among the team’s staffers, and Payton himself struggled with the decision. Depending on how things play out over the coming weeks, Winston remains an option for 2021.

As for Brees himself, his injury is even more extensive than previously thought. According to Ed Werder of ESPN.com, Brees has 11 rib fractures — eight on his left side and three on his right (Twitter link). However, doctors have been encouraged by Brees’ progress, including improvement in his lung function, and the 41-year-old passer believes he will be able to come off IR as soon as he is eligible in Week 14 (Twitter links via Werder).

Even if it takes until Week 15 for Brees to return to the field, it sounds like the Saints will have the future Hall of Famer back in time for at least one more playoff run.