Feb. 14: Lawrence will undergo left labrum surgery on February 16, as Ian Rapoport of NFL.com reports (via Twitter). Well-known surgeon Dr. Neal ElAttrache will perform the operation, and recovery time is estimated to be five to six months. As such, the expectation remains that Lawrence will be ready to go by training camp, or not too long thereafter.

Feb. 12: As expected, Trevor Lawrence did not do anything Friday to remove himself from being the favorite to go No. 1 overall. The three-year Clemson starter went through his early pro day, throwing for teams (including the Jaguars) on campus. He will not be throwing again for a while, however. 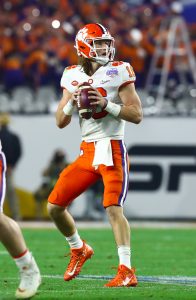 Lawrence estimated he will be able to throw again at some point in the next two months but added that it could be four or five months until he receives full clearance for all football activities, Field Yates of ESPN.com tweets.

News emerged last week of Lawrence needing surgery on his left shoulder, and while it would certainly benefit the incoming rookie to be able to throw without restrictions during the spring and early summer, 2021 draftees’ first NFL offseasons are expected to be mostly virtual. Whereas rookie QBs from drafts prior to the 2020s went through rookie minicamps, OTAs and minicamps, this class may not take the field with their respective teams until training camp. By then, Lawrence could be ready to go.

The 6-foot-5 passer weighed in at 213 pounds Friday, but NFL.com’s Daniel Jeremiah expects the high-end prospect to be closer to 230 by the time he reports to camp. Clemson listed Lawrence at 220 pounds last season. Representatives from 17 teams showed up Friday to observe the 21-year-old prodigy, per ESPN.com’s Michael DiRocco, with Urban Meyer, OC Darrell Bevell and passing-game coordinator Brian Schottenheimer leading the Jacksonville contingent.

6 comments on “Trevor Lawrence Recovery Timeline To Stretch Into Summer”