Mills went in the midst of a Day 2 QB run, hearing his name called just after Florida QB Kyle Trask (Buccaneers) and Texas A&M QB Kellen Mond (Vikings). Some prognosticators preferred Mills to Trask and Mond, and most oddsmakers actually expected him to come off the board first. Mills does not project to be a world-beater, but he is nearly 6’4″ and fairly built with better-than-average footwork.

Injuries to starter K.J. Costello thrust Mills under center in 2019. That year, he threw for 1,960 yards and eleven touchdowns across eight games. In 2020, he was named the starter as Costello left for Mississippi State. In his (abbreviated) 2020 campaign, Mills completed 66.2% of his throws for 1,508 yards and seven TDs.

In related news, the Texans fielded inquiries from the Pats, Bears, and the Washington Football Team prior to the draft. By now, at least two of those teams are probably out of the Watson picture.

Panthers Acquire No. 70 From Eagles

The Eagles will trade out of their No. 70 overall selection, dealing the choice to the Panthers. Carolina possessed three third-round choices; the team will begin that itinerary a bit early.

Carolina will climb from No. 73 to 70 and give Philadelphia a sixth-round pick (No. 191) to do so. With the pick, the Panthers are taking BYU tackle Brady Christensen.

The 24-year-old blocker played three seasons with the Cougars, blocking for No. 2 overall pick Zach Wilson. This marks the Panthers’ second straight offensive pick, after the franchise began its Matt Rhule era with a slew of defensive selections. Christensen will follow Terrace Marshall Jr. to Charlotte.

In the middle of a run of Day 2 quarterback picks, the Vikings entered the fray. They are taking Texas A&M’s Kellen Mond at No. 66.

Two picks after Kyle Trask went to the Buccaneers, Mond will join a Vikings team that also has an established quarterback. The multiyear Aggies starter will step in behind Kirk Cousins.

The Vikings have not yet re-signed Sean Mannion, who has worked as Cousins’ backup for the past two seasons. While they could opt to add a veteran to serve as their backup quarterback while Mond learns, the rookie as of now has a ticket to QB2 status.

Mond started for the past three seasons at the SEC school and loomed alongside Trask as the top quarterbacks available after the much-hyped top five. The seasoned passer finished his career with a 71-27 TD-INT ratio, facing perennially tough schedules.

While the Vikings re-signed Cousins, their fourth-year starter’s contract only runs through 2022. The Vikings can shed that contract without incurring any dead-money charges next year.

With the No. 64 overall pick, the Buccaneers selected Florida quarterback Kyle Trask. Trask will now get to learn from the best as he backstops Tom Brady.

The Florida quarterback broke onto the scene in 2019 and elevated his game further in 2020. Trask ultimately finished 2020 with a 68.9-percent completion rate, 4,283 yards, and 43 touchdowns against just eight interceptions. Meanwhile, per the metrics at Pro Football Focus, Trask was the only college QB to throw for 10+ TDs with zero turnovers on deep balls.

Many pegged Trask as the best quarterback outside of this year’s top tier. Only Trevor Lawrence, Justin Fields, Zach Wilson, Mac Jones, and Trey Lance were regarded as qualified first-rounders, but Trask’s game management skills had him ranked fairly high on most boards. In addition to the Bucs, the rival Saints were also said to be eyeing him.

The Cardinals used the No. 49 pick in the draft to select wide receiver Rondale Moore. Depending on Larry Fitzgerald‘s big decision, the Purdue product could be in line for a significant role in 2021. 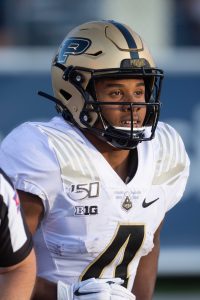 Moore dominated as a freshman in 2018, totaling 1,471 scrimmage yards and 14 touchdowns en route to Big Ten freshman of the year acclaim. Unfortunately, a hamstring injury ended the Boilermaker’s second season after just four games. Rather than enter the NFL only on the strength of his abbreviated underclassman run, the 5-foot-9 standout returned for one more year.

This summer, The Athletic’s Dane Brugler tabbed Moore as his No. 3 wideout prospect for the 2021 class. He wound up playing just three games this past year, but he made the most of them, going off for 35 catches and 270 yards.

Moore is a big-play threat who can make plays in space, and also has been an elite return specialist. His selection could be a sign that Fitzgerald is planning to hang up his cleats.

Arizona also signed A.J. Green this offseason, and this move is only pouring more fuel on the fire that Fitz is leaning toward retirement. With DeAndre Hopkins and Christian Kirk also in tow, Kyler Murray is going to have quite the receiving group at his disposal in 2021.

The Chargers have added one of the biggest names left on the board with the 47th overall pick. Los Angeles drafted Florida State cornerback Asante Samuel Jr. 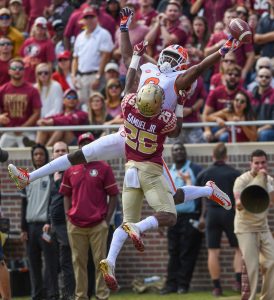 Most NFL fans will recognize the name at least because of Samuel’s father, who starred with the Patriots and Eagles a decade-plus ago. The younger Samuel was a legit first-round prospect, and NFL.com’s Daniel Jeremiah had him going 30th overall in his final mock draft.

Samuel was a first-team All-ACC this past season, and will be an interesting piece for Brandon Staley’s inaugural defense in Los Angeles. Some scouts thought Samuel was a bit undersized, but he’s a playmaker who had three interceptions and two fumble recoveries in only eight games in 2020.

In 2019, he had 14 passes defended in 12 games. The Chargers really needed some cornerback help after letting Casey Hayward go this offseason. Samuel will now join a young secondary that has to be hyped to play for the defensive guru Staley, and it also includes fellow FSU alum Derwin James.

The elder Samuel won two Super Bowls while making three All-Pro teams and four Pro Bowls, so if he can come anywhere close to his father the Chargers will be quite happy.

Another trade! The 49ers are sending the 43rd overall pick to the Raiders, who will use it on TCU safety Trevon Moehrig.

Moehrig is a two-time first-team All-Big 12 selection, and many pundits — like ESPN’s Mel Kiper Jr. — considered him to be the best safety in the 2021 class. He is a definite playmaker, having recorded nine takeaways over the past two seasons. He also earned the Thorpe Award, which goes to the nation’s top defensive back. He is at his best when asked to play a single-high, “centerfielder” role.

Still, no matter what role Moehrig is put into, his defensive coordinator should appreciate the player’s versatility. While he’ll have to improve his hands a bit in the NFL to play a position besides safety, he could eventually see time as a bruising slot corner.

It was a pretty big surprise that both Oregon’s Jevon Holland and UCF’s Richie Grant went ahead of him, as Moehrig was widely expected to be the first safety off the board. It’s quite possible the Raiders made this move specifically to get ahead of the Cowboys at 44, as many believed Dallas could be targeting Moehrig.

Dave Gettleman just can’t stop trading back. After getting dragged this cycle for seemingly never trading down, the Giants GM has now done it in the first and second-rounds. New York has traded the 42nd overall pick to the Dolphins. Miami used the pick on offensive tackle Liam Eichenberg from Notre Dame.

Not a bad deal for the Giants. They got an extra 2022 first-rounder on Thursday, and now picked up a free third-rounder for moving down eight spots. Gettleman is quieting the critics in a hurry.

Eichenberg is continuing what appears to be the start of a run on offensive linemen, as the Bears just drafted Teven Jenkins moments ago. Miami drafted Austin Jackson in the first-round last year to be their left tackle, and now Eichenberg can potentially slide in as the right tackle.

NFL.com’s Daniel Jeremiah had Eichenberg going at the end of the first-round, and he had a real chance to go on Day 1. He was first-team All-ACC and a consensus All-American in 2020. He’s got great size, and Miami clearly felt he was going to go in the next few picks if they were willing to give up a third-rounder to move up.

The Falcons have traded their early second-round choice to the Broncos. With the No. 35 overall pick, the Broncos have selected UNC running back Javonte Williams.

The Broncos needed backfield help after letting Phillip Lindsay walk in free agency, and Williams was widely considered the top running back left. Williams, Najee Harris, and Travis Etienne were universally regarded as the top three backs, with many teams having them ranked in different orders.

As Mike Garafolo of NFL Network tweets, there were strong rumors that the Dolphins wanted Williams at 36, so Denver wanted to leapfrog them to get their guy. Williams broke out as a sophomore in 2019 with 933 yards and five scores, but took his game to a new level this past season.

He was electric for UNC in 2020, rushing for 1,140 yards (7.3 YPC) and 19 touchdowns. He added 25 catches for 305 yards and another three touchdowns. He’ll immediately start pushing Melvin Gordon for touches.