On this date in 2017, the Bills inked cornerback Tre’Davious White to his first NFL contract. Per the terms of his slot, his four-year deal was worth $10.1MM, including a $5.48MM signing bonus. 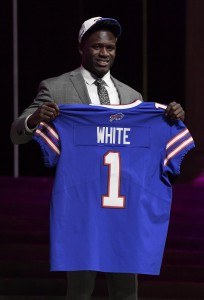 Of course, the Bills were not initially set to for the backend of the first round. They originally held the No. 10 overall selection, but moved down after the Chiefs agreed to send the No. 27 pick, a third-round pick, and their 2018 first-round selection. With that No. 27 pick, the Bills selected White. And, at No. 10, the Chiefs took a quarterback named Patrick Mahomes.

That’s a factoid that will forever be attached to White. However, that’s not exactly fair to the LSU product. White immediately stepped into a primetime role after Stephon Gilmore‘s departure. The Bills had also moved on from slot specialist Nickell Robey-Coleman that year — White showed his skills and promise right off the bat.

After notching six interceptions in his first two seasons, White doubled his total with a stellar 2019. His six picks led the league that year, earning him Pro Bowl and first-team All-Pro honors. In 2020, the Bills happily re-upped White on a four-year, $69MM extension with $55MM guaranteed.

Consider this: White allowed just five touchdowns in his first three seasons and led all cornerbacks during that time with a 60.6 passer rating. Fans can keep talking about Mahomes if they want, but White is one heck of a consolation prize.