Bad news for the Ravens. On Monday, head coach John Harbaugh confirmed that cornerback Marlon Humphrey will miss the rest of the year with a torn pectoral muscle. 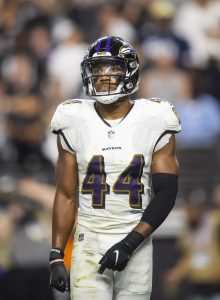 This was the fear after Humphrey was forced out early from Sunday’s game against the Steelers. Down by one point late in the game, the Ravens could have taken the Steelers to overtime on Sunday with an extra point. Instead, they opted to go for a two-point conversion, knowing that they’d have to go through OT without their star defender. Unable to convert, they lost 20-19, dropping them to 8-4 on the year.

The Ravens still lead the AFC North at 8-4, but it’ll be a little tougher to stave off the 7-5 Bengals without Humphrey. Humphrey, the No. 16 overall pick in the 2017 draft, is fresh off of back-to-back Pro Bowl seasons, plus a First-Team All-Pro nod in 2019. Last year, he registered 82 stops, 2.5 sacks, one interception, and a league-leading eight forced fumbles. The 25-year-old hasn’t been quite as sharp this year, but he still ranks as the 27th best cornerback in the NFL, according to Pro Football Focus.

The Ravens, sans Humphrey, take on the Browns this week.