The Jaguars — who are searching for their next head coach — recently “had a conversation” with Josh McCown, according to Aaron Wilson of SportsTalk790. However, their chat with McCown was not a formal interview for the position. 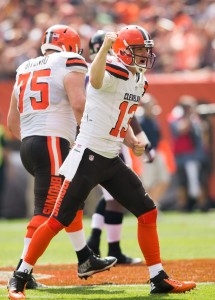 The Texans, meanwhile, seem to be very bullish on McCown as their next HC, despite his lack of experience. Because the longtime quarterback has never coached at the NFL or NCAA level, the Texans are reportedly hoping that other teams will interview McCown. This “conversation” with the Jaguars doesn’t exactly fit the criteria, but it might be enough for GM Nick Caserio to move on McCown, if that is indeed his preferred hire.

McCown, 42, spent the later part of his career as a mentor of young quarterbacks. He is, by all accounts, universally beloved and respected for his leadership qualities and football IQ. However, to date, his only coaching experience has come at the high school level, guiding his sons at Charlotte’s Myers Park High School.