About a month after he said he would continue to call offensive plays, Broncos head coach Nathaniel Hackett has had a change of heart. Per Tom Pelissero of NFL.com, Hackett is ceding play-calling duties to quarterbacks coach Klint Kubiak. 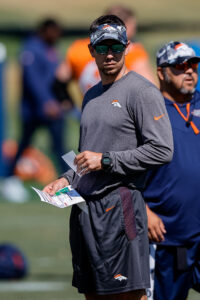 Denver’s 3-6 record qualifies as one of the league’s biggest disappointments in 2022, as the team made a blockbuster offseason trade to acquire quarterback Russell Wilson and entered the campaign with Super Bowl aspirations. Early-season missteps earned Hackett, a first-year head coach, plenty of criticism and compelled him to hire Jerry Rosburg out of retirement to assist with gameday management. But mounting injuries and persistent offensive struggles have conspired to keep the Broncos out of the playoff picture, and now Kubiak will have a larger role in the club’s efforts to make a second-half run.

Kubiak, 35, is the son of longtime NFL offensive coordinator and head coach Gary Kubiak. In 2021, the younger Kubiak served as the play-caller and OC for the Vikings, who finished 12th in the league in total offense and 14th in yards per game. Per Pelissero, that experience is what prompted Hackett to tab Klint Kubiak as Denver’s new play-caller, and both men, along with offensive coordinator Justin Outten, will be heavily involved in game-planning. Hackett and Outten will of course remain on the headset during games, though Kubiak will now be the primary voice in Wilson’s ear.

Pelissero adds that Wilson and Kubiak have formed a strong relationship despite the team’s struggles. However, they will have their work cut out for them, as the Broncos have 15 players on injured reserve, including key offensive contributors like left tackle Garett Bolles and running back Javonte Williams. Moreover, receivers Jerry Jeudy and KJ Hamler will miss Sunday’s contest against the Raiders due to injury.

As of the time of this writing, Denver is last in the league in points per game, and Wilson has completed a career-worst 57.4% of his passes en route to a poor 81.4 QB rating. On the other hand, the Broncos are in the middle of the pack in terms of total offense, so there is some hope that a different play-calling approach will put more points on the board. And although the deadline trade of pass rusher Bradley Chubb will sting, the team is tops in the NFL in scoring defense, second in total defense, and its six losses have come by an average of five points. All of that provides further hope for a turnaround.

Hackett really had no choice but to make this move. Rumors are already swirling that he may be a one-and-done head coach, and the Rosburg hire, along with the pivot to Kubiak as play-caller, at least demonstrates that he is willing to put ego aside for the betterment of the team. Last year, Eagles head coach Nick Sirianni ceded play-calling duties to offensive coordinator Shane Steichen in the middle of the season, and Philadelphia’s offense was much-improved after the switch. In 2022, the 8-1 Eagles continue to thrive, so there is recent precedent for Hackett and Broncos fans to dream on.