The Lions announced today that they will be adding two major pieces at a time when the team is playing its best football of the season. Rookie first-round pick Jameson Williams is set to make his NFL debut after spending the first 12 weeks of the season on the reserve/non-football injury list and defensive end Romeo Okwara is set to play his first football since October 3rd of last season. 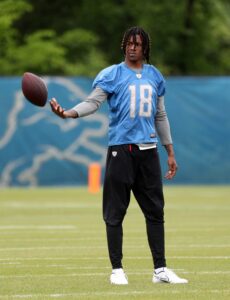 Williams was a transfer student who joined the Crimson Tide after two seasons at Ohio State. In his lone season at Alabama, Williams dominated as the team’s No. 1 receiver. While teammate (and fellow rookie who also has yet to play an NFL snap) John Metchie III led the team in catches (96), Williams led the team in every other receiving category with his 79 receptions for 1,572 yards and 15 touchdowns. A month after Metchie tore his ACL in the 2021 SEC Championship Game, Williams tore his in the 2022 College Football Playoff National Championship game.

Detroit has had to make do without many receiving options this year. Williams has been unavailable until now, free agent addition DJ Chark has only appeared in five games this year due to an ankle injury, and Quintez Cephus has been on injured reserve since the beginning of October, much like he was last year. With all those receivers out, second-year wide out Amon-Ra St. Brown has stepped up for a breakout year leading the team in receptions (65), receiving yards (716), and receiving touchdowns (4). Kalif Raymond and Josh Reynolds have also been asked to step up during the absences. It’s unclear how much Williams will be involved this week, so it might make sense for the Lions to play this week with a top-three of St. Brown, Raymond, and Chark, easing Williams into professional play and counting on Reynolds and Tom Kennedy in relief.

Okwara is in his fifth year with the Lions after spending two years as an undrafted free agent with the Giants. Detroit claimed the pass rusher off waivers from New York just before the 2018 season and he rewarded them immediately. Okwara started 14 games for the Lions in 15 appearances and led the team with 7.5 sacks and 14 quarterback hits, adding eight tackles for loss for good measure. After a surprising down year in 2019 where Okwara saw his usage plummet, he came back with a vengeance in 2020. Okwara posted career highs in sacks (10.0), tackles for loss (11.0), and quarterback hits (18) leading the team in each category by a mile. Okwara saw his 2021 season end with a torn Achilles tendon in Week 4 and hasn’t seen the football field since, spending all of this season so far on the reserve/physically unable to perform list.

The Lions pass rush could certainly use the 2020-version of Okwara. The team’s sack leader this year in rookie No. 2 overall pick Aidan Hutchinson, who only has 5.5 sacks. After Hutchinson, Detroit has three players tied with two sacks apiece. One of those players is Okwara’s younger brother Julian Okwara. The younger Okwara brother is unfortunately headed to IR after injuring his elbow in the team’s Thanksgiving Day matchup with the Bills. Unless the team feels strongly about bringing the third-year outside linebacker back for the final two games of the regular season, his year may be over. Activating Romeo is a big boost but losing your second-most effective pass rusher for the season in Julian hurts.

In addition to the team’s three reserve list transactions, the Lions will also promote center Ross Pierschbacher from the practice squad as a standard gameday elevation against the Jaguars this week.