As the college football bowl schedule emerges, a handful of NFL hopefuls will pass on those games. Oregon’s Christian Gonzalez is one of them. The highly rated cornerback is declaring for the 2023 draft, he announced (on Twitter). 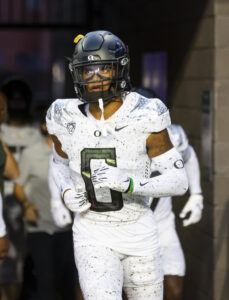 Gonzalez played two seasons at Colorado and one at Oregon, transferring within the Pac-12 this year. He will join several players who are passing on bowl games to guard against injury. Ohio State wideout Jaxon Smith-Njigba is passing on a College Football Playoff semifinal, though he has missed most of this season due to injury.

ESPN’s Todd McShay slots Gonzalez as the second-ranked draft-eligible corner — behind only Georgia’s Kelee Ringo — while Mel Kiper Jr. pegs him as the class’ fourth-best corner. Gonzalez’s declaration follows the NCAA exits of Penn State’s Joey Porter Jr. and South Carolina’s Cam Smith; both are consensus top-five prospects at the position and will thus be on the first-round radar. Oregon has not produced a first-round corner since Alex Molden in 1996.

Following the transfer, Gonzalez intercepted four passes — the first four of his career — and finished his 12-game season with a career-high seven passes defensed. While the 6-foot-2 defender only played six games during 2020’s COVID-19-altered Pac-12 season and will pass on his senior year, he closes his career having never missed a contest.

Oregon is set to play North Carolina in the Holiday Bowl. Next season will mark the last of the four-team CFP. The change will further diminish the bowls’ standing and put draft prospects who are on CFP-bound teams’ rosters to tests regarding participation.