Dan Quinn continues to prepare for tomorrow’s showdown against the 49ers, but the Cowboys defensive coordinator is becoming one of the most popular names in the head coaching carousel. The latest addition to the list of potential Quinn suitors is the Cardinals. NFL Network’s Tom Pelissero reports (via Twitter) that the Cardinals have requested permission to interview Quinn for their head coaching vacancy. Pelissero tweets that a virtual interview will take place today. 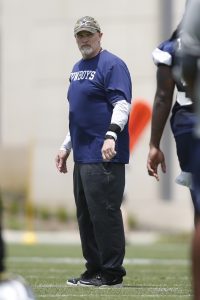 Quinn has already crammed in a pair of interview this week; he interviewed in-person with the Broncos last night and then met virtually with the Colts this morning. Quinn was a popular name last year, as well. He was a finalist for the Broncos job, and he also garnered interest from the Bears, Jaguars, Dolphins, Vikings, and Giants before ultimately deciding to stick in Dallas.

Quinn started his NFL coaching career with the 49ers. Following stints with the Dolphins and Jets, he joined Seattle in 2009 and eventually worked his way up to Seahawks’ defensive coordinator. He coached the NFL’s best defense in 2013 en route to a Super Bowl championship, and following another successful year in 2014, he was hired as the Falcons head coach prior to the 2015 campaign.

In Atlanta, Quinn had a pair of winning seasons and three others that saw him finish a combined 22-26. His most successful season came in 2016 when he coached the Falcons to Super Bowl LI. Of course, Atlanta ended up surrendering the biggest lead in Super Bowl history in that game, and the team would make only one more playoff appearance before Quinn was ousted five games into the 2020 campaign. He joined Dallas as their defensive coordinator prior to the 2021 season.

With the Cardinals having hired Monti Ossenfort as their new GM, the team continues to add to their list of head coaching candidates. The continually growing list also includes:

6 comments on “Cardinals To Interview Dan Quinn For HC Job”