Dan Quinn is a finalist for another head coaching gig. According to Albert Breer of TheMMQB (on Twitter), the Colts are planning to conduct a second interview with the Cowboys defensive coordinator. The meeting is expected to take place on Saturday. 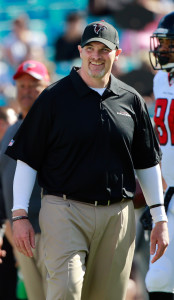 With Dallas now out of the playoffs, Quinn was free to speak with any teams, and he’s been quickly moving through the interview circuit. He had a second interview with the Cardinals earlier today, and he was also a candidate for the Broncos’ head coaching job. The 52-year-old is expected to get a second interview in Denver.

Quinn spent five-plus years as Atlanta’s head coach, a stint which was highlighted by a Super Bowl appearance. He joined Dallas as their defensive coordinator prior to the 2021 season, and the Cowboys proceeded to finish first in takeaways and top-10 in points allowed in each of Quinn’s two years at the helm. Quinn was also a popular HC candidate last offseason, generating interest from the Bears, Jaguars, Dolphins, Vikings, and Giants.

The Colts are now moving on to the second phase of their interview process. After conducting virtual interviews with a league-high 13 candidates, owner Jim Irsay will now meet with seven or eight finalists for the position. Broncos defensive coordinator Ejiro Evero, Rams defensive coordinator Raheem Morris, and interim head coach Jeff Saturday were among those who moved on to second interviews, while Chiefs offensive coordinator Eric Bieniemy and Colts special teams coordinator Bubba Ventrone are also expected to garner in-person meetings.

Jim Harbaugh was initially considered a candidate but ultimately stuck with Michigan, while Lions offensive coordinator Ben Johnson interviewed for the Colts job before deciding to stay in Detroit. The team also still wants to speak with 49ers defensive coordinator DeMeco Ryans, who they’ve struggled to secure for a first interview. Otherwise, Indy conducted first interviews with six other candidates: