Not long after being mentioned as a key component of the Jets’ offensive coordinator search, Darrell Bevell is indeed in line to interview for the job. The Jets are planning to speak with the Dolphins’ quarterbacks coach, Ian Rapoport of NFL.com tweets.

In addition to Bevell, the team is planning to meet with Patriots tight ends coach Nick Caley, Albert Breer of SI.com tweets. The Caley interview will take place Tuesday. The Jets are looking to replace Mike LaFleur, whom the team parted ways with after two seasons last week. LaFleur is expected to join Sean McVay‘s Rams staff. 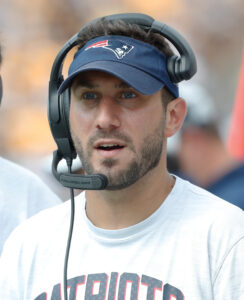 Bevell, 53, has been an NFL OC dating back to the 2000s. Prior to the rare feat of Bevell becoming the interim HC for separate teams (the Lions and Jaguars) in back-to-back years, he enjoyed more memorable OC tenures with the Vikings (2006-10) and Seahawks (2011-17). Brett Favre‘s former QBs coach was on board as Seattle’s OC during the Russell Wilson–Marshawn Lynch partnership’s run, which featured the team’s consecutive Super Bowl berths. The Seahawks fired Bevell following the 2017 season, but he has remained a sought-after staffer. Bevell and Robert Saleh were each on the Seahawks’ staff from 2011-13.

Bevell’s most recent work may be why he is viewed by some as the early favorite for Gang Green’s play-calling gig. Tua Tagovailoa took a substantial leap this season under Mike McDaniel, finishing a concussion-marred campaign third in the NFL in QBR. Tagovailoa threw 25 touchdown passes despite finishing only 12 games. McDaniel calls the Dolphins’ plays, but Bevell provided the rookie HC and first-time OC Frank Smith with considerable experience.

Caley does not bring close to Bevell’s experience, but the Patriots assistant saw a responsibility bump during the team’s unusual post-Josh McDaniels season. Caley, 39, has been New England’s tight ends coach since 2017 and is on the radar for the Pats’ OC role. Though, Bill O’Brien looks like the frontrunner here. Although the Pats may not be wild about Caley joining the Jets, teams can no longer block position coaches from interviewing for coordinator roles.

Gang Green moved on from LaFleur but is believed to be planning to retain quarterbacks coach Rob Calabrese, Aaron Wilson of KPRC tweets. The team did, however, dismiss offensive line coach John Benton. An NFL O-line coach since 2003, Benton has served in this capacity for five teams. He worked with LaFleur on Kyle Shanahan‘s 49ers staff for four seasons prior to joining the Jets. The Jets are also looking to replace Miles Austin, who is appealing an NFL suspension for gambling, and assistant D-line coach Greg Scruggs. The latter joined Wisconsin’s staff as defensive line coach last week.