Mychal Kendricks‘ 49ers stay looks set to be brief. The team placed the veteran linebacker on IR Tuesday. Kendricks will no longer be eligible to suit up with San Francisco this season. The team also released cornerback B.W. Webb.

The recently signed linebacker is battling turf toe, an injury he sustained while playing in the 49ers’ second preseason game. The 49ers signed the veteran defender just last week, after he impressed during a workout. This marks another health setback for Kendricks, who suffered an ACL tear late in the 2019 season and saw his 2018 season end due to a broken leg.

Kendricks could play this season, but the 49ers would need to cut him from their IR list — which appears likely — via an injury settlement. However, the nine-year veteran’s run of bad injury breaks will limit his appeal. The 49ers had reached a unique arrangement, signing Kendricks to play for former teammate DeMeco Ryans, who is now the team’s defensive coordinator. This would be Kendricks’ age-31 season. He has played with Philadelphia, Seattle and Washington.

Webb caught on with San Francisco earlier this month as well but did not impress enough to make it past Tuesday’s second cutdown deadline. The 31-year-old veteran has not played since the 2019 season and has never played for the same team in back-to-back years. The 49ers were his 10th NFL stop.

Webb last played for the Bengals in 2019, when he started 12 games. The slot corner also worked as a primary starter in 2018, lining up as a Giants first-stringer in 13 contests.

B.W. Webb is heading to San Francisco. The veteran cornerback is signing with the 49ers, reports ESPN’s Field Yates (via Twitter).

The 2013 fourth-round pick has earned journeyman status after spending time with nine teams in eight years. Webb actually had two of his better NFL seasons in 2018 and 2019, collecting 82 tackles, 13 passes defended, and two interceptions in 31 games (25 starts) split between the Giants and Bengals. In total, the 31-year-old has seen time in 80 career games, and he got into a single playoff game with the Steelers in 2014.

Webb signed a one-year contract with the Cardinals last August, but he ended up getting cut less than a week later. The veteran didn’t sign with a club for the rest of the 2020 campaign.

The 49ers could temporarily use some extra bodies at cornerback. Emmanuel Moseley is on the reserve/COVID-19 list, Tim Harris Jr. is sidelined with a hamstring injury, and Dontae Johnson is dealing with a foot injury. Webb still has an uphill battle to make San Francisco’s roster, but he’ll get a chance at an extended look over (at least) the next few practices.

B.W. Webb‘s stint with the Cardinals lasted all of (*checks calendar*) six days. ESPN’s Adam Caplan reports (via Twitter) that Arizona has cut the veteran cornerback. 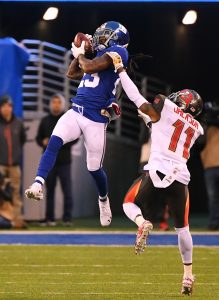 The Cardinals signed the 30-year-old to a one-year deal last Friday, and it was believed he’d fill in for the injured Robert Alford (who suffered a season-ending pec injury). However, the team has since added some depth to their secondary, as they signed both Ken Crawley and Dre Kirkpatrick. With the cornerbacks room getting increasingly crowded, the Cardinals apparently saw no use for Webb.

It was only last offseason that Webb was able to snag a two-year, $10.5MM deal from the Bengals, but he only lasted a single season in Cincinnati. He ultimately started 12 of his 15 games in 2019, compiling 37 tackles, one interception, and seven passes defended. He was released by Cincy back in March.

However, he had a stronger season in 2018 as a member of the Giants. As our own Zach Links pointed out last week, Webb ranked as Pro Football Focus’ No.77 cornerback, putting him on the same tier as the likes of Morris Claiborne, Marcus Peters, Minkah Fitzpatrick, and Jimmy Smith. Thanks in part to those metrics, it wouldn’t be shocking if Webb catches on with another squad before the season begins.

The Cardinals have agreed to sign B.W. Webb, as Adam Schefter of ESPN.com tweets. Webb will join the Cards on a one-year deal, giving the club another cornerback to consider as the season draws near.

Webb hooked on with the Bengals last year on a two-year, $10.5MM deal, but he only fetched $2.5MM in guaranteed dollars. In his lone Bengals season, Webb appeared in 15 games and started in 12 of those contests. In March, they cut him to save $3.5MM against the cap.

Webb, 30, had a stronger 2018 when he was with the Giants. In that season, he graded out as the No. 77 ranked corner in the league, according to Pro Football Focus. By those advanced metrics, he performed roughly as well as Morris Claiborne, Marcus Peters, Minkah Fitzpatrick, and Jimmy Smith.

Now with the Cardinals, Webb will look to find a roster spot behind starters Patrick Peterson and Byron Murphy.

The Bengals will release B.W. Webb today, according to ESPN.com’s Josina Anderson (on Twitter). The move will save the team $3.5MM against the 2020 salary cap while leaving $1MM in dead money.

Webb joined the Bengals last year on a two-year, $10.5MM deal, but he only fetched $2.5MM in guaranteed dollars. In his lone Bengals season, Webb appeared in 15 games and started in 12 of those contests. In a difficult season full of injuries, the Bengals finished the year 2-14.

Webb, who turns 30 in May, had a stronger 2018 when he was with the Giants. In that season, he graded out as the No. 77 ranked corner in the league, according to Pro Football Focus. By those advanced metrics, he performed roughly as well as Morris Claiborne, Marcus Peters, Minkah Fitzpatrick, and Jimmy Smith.

It’s just the latest shuffling of cornerbacks for the Bengals, who added Trae Waynes and lost Darqueze Dennard to the Jaguars this week.

Cornerback B.W. Webb has signed with the Bengals, according to Dianna Russini of ESPN.com (on Twitter). The Bengals confirmed the news and announced that it is a three-year deal. It’s believed to be worth up to $13MM, per Geoff Hobson of Bengals.com.

By signing with Cincinnati, he rejoins new Bengals defensive coordinator Lou Anarumo, his defensive backs coach with the Giants last year. The deal brings Webb to his sixth team in six years and gives the Bengals an option at slot cornerback. He also has experience in the slot, so he could potentially replace free agent Darqueze Dennard.

Webb, 29 in May, appeared in all 16 games for the Giants last season, including 13 starts. He finished out with 59 total stops, one tackle, one forced fumble, and six passes defensed. Webb graded out as the No. 77 ranked corner in the NFL with a career-best 62.6 overall score. He wasn’t an elite CB, but the advanced metrics dropped him in the same neighborhood as Morris Claiborne, Marcus Peters, Minkah Fitzpatrick, and Jimmy Smith.