The Lions have a new offensive coordinator in Darrell Bevell, but they checked in with an interesting name before making the hire. Former Notre Dame head coach and Patriots assistant Charlie Weis “talked” with Matt Patricia about the job, Weis tells Dave Birkett of the Detroit Free Press. 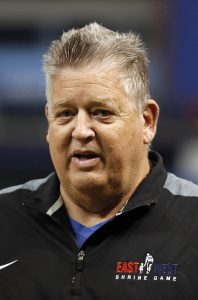 “We talked, but it never got to that point,” Weis said. “There was no interview. Matt and I are too close to go through an interview. If it ever would have happened, it would have been, ‘Hey, you want to come?’ And I would have said yes or no. It wouldn’t have been anything other than that.”

These days, Weis is working in radio, but it sounds like he’s at least open to a return to coaching.

Charlie Weis is eyeing a return to the NFL. The 62-year-old told ESPN’s Adam Schefter that “he is interested in becoming an offensive coordinator in the league again.”

Weis started coaching back in 1979 as an assistant coach for Boonton High School in New Jersey. He ultimately worked his way up to become the offensive coordinator with the New York Jets, but he truly made a name for himself during his tenure in New England. Weis teamed up with Bill Belichick and Tom Brady (and, briefly, Drew Bledsoe) to help guide the Patriots to three championships during his five years with the organization.

Weis inked a lucrative six-year deal with Notre Dame in 2005, but he only lasted five seasons as the head coach. He helped lead the Fighting Irish to a 19-6 record between 2005 and 2006, but the team went 16-21 during his final three seasons with the school. After being fired by Notre Dame, Weis caught on as the Chiefs offensive coordinator in 2010, and that’s the last time he’s worked in the NFL. Since that time, the long-time coach has served as the offensive coordinator at Florida and the head coach at Kansas, but he hasn’t coached full-time since 2014.

Weis cautioned that he’d only consider a gig if the right situation presented itself. The coach said he’s received the blessing from his wife, he’s stayed up to date on the “trends and players,” and he’s “stayed in the game” thanks to his television and radio work.

When John Harbaugh was originally interviewing for the Ravens head coaching position, he received a bit of help from one of his colleagues. Patriots head coach Bill Belichick gave owner Steve Bisciotti a call, endorsing the former Eagles special teams coach for the opening. Harbaugh eventually got the job, and as Aaron Wilson of The Baltimore Sun writes, the coach still appreciates the recommendation from his upcoming playoff opponent:

“It meant everything. As far as probably getting the job, it didn’t hurt. You have to ask Steve and Ozzie [Newsome] if it made the difference or not. But the fact that he was willing to do that at the time, I was stunned when I heard the story much later.

“I would describe the relationship as very good, great admiration for coach. I’ve never worked with him, specifically, but for whatever reason he has been always willing to kind of take me under his wing in a way and give me time and insight and things like that.”

The big news out of Cleveland today is the departure of offensive coordinator Kyle Shanahan, who reportedly asked to be released from his contract. With quarterbacks coach Dowell Loggains also leaving the Browns, the team will revamp its coaching staff yet again heading into the 2015 season. Here are the latest updates on Shanahan, the newly-opened OC job, and other Browns-related topics:

Earlier this morning, we rounded up a handful of coaching-related updates. Plenty more items have surfaced over the course of the day, so let’s check in on the latest: