Trent Baalke will resurface in Jacksonville. More than three years after the 49ers fired him from the GM post he held for much of the 2010s, Baalke will join the Jaguars as their director of player personnel, Tom Pelissero of NFL.com tweets.

The Jaguars are replacing Chris Polian with Baalke, per Ian Rapoport of NFL.com (on Twitter). Polian had been with the Jags since Dave Caldwell came aboard as GM in 2013. This will be Baalke’s first role with a non-49ers team in 16 years.

Baalke, 55, worked his way up the ladder in San Francisco, going from regional scout to GM. His tenure produced notable clashes with Jim Harbaugh and ended with the 49ers becoming the first team to have back-to-back one-and-done HCs in nearly 40 years, but Baalke did team with Harbaugh to lift the 49ers to their most consistently strong stretch since the 1990s. The 49ers trekked to three straight NFC championship games from 2011-13 and came close to winning Super Bowl XLVII.

In 2017, Baalke joined the league office as a football operations consultant. This represents a key opportunity for the former 49ers, Jets and Redskins staffer. Baalke began his career with the Jets in the late 1990s before being a Redskins scout for four seasons in the early 2000s.

Polian was once linked to the 49ers’ GM job in 2017. That job went to John Lynch, who has played a key role in resurrecting a franchise that had endured a steep freefall in Baalke’s final years. Baalke hires Jim Tomsula and Chip Kelly went a combined 7-25 between the 2015-16 seasons. A second-generation NFLer, Chris Polian had served under father Bill Polian in Indianapolis during the latter’s tenure there. Chris Polian re-emerged in Jacksonville and rose from pro personnel director to player personnel director during his lengthy tenure.

This hire comes shortly after Shad Khan surprised some by announcing Caldwell and Doug Marrone would return for another season, despite the Jags having fallen far since the 2017 AFC title game. Caldwell figures to enter the 2020 season on the hot set, but Baalke will attempt to help this regime right the ship.

Another Packers executive won’t be finishing out the GM interview process with the 49ers. The Packers will retain player personnel director Brian Gutekunst after he withdrew his name from the San Francisco GM search, Adam Schefter of ESPN.com tweets.

One of the finalists for the NFL’s lone vacant GM job, Gutekunst instead signed a new deal to stay in Green Bay, Ian Rapoport of NFL.com reports (on Twitter).

The Packers reached an agreement earlier this week to retain director of football operations Eliot Wolf, so the 49ers’ effort to pry one of Ted Thompson‘s top staffers won’t come to fruition. The Packers execs’ decisions to stay in Green Bay come after Seahawks co-director of player personnel Trent Kirchner announced he was withdrawing from the pursuit.

This could leave Vikings assistant GM George Paton in the driver’s seat for the job as the one known finalist still in the running. He’s set to meet with the 49ers next week. Although the team is keeping an eye on Cardinals’ vice president of player personnel Terry McDonough, Matt Maiocco of CSNBayArea.com reports, Paton is expected to meet with 49ers brass — and possibly leading HC candidate Kyle Shanahan — on Tuesday. Michael Silver of NFL.com also tabs Paton (Twitter link) as the favorite to become the 49ers’ next GM and win what’s become a complex race not unlike what’s transpired in the derby to become their next coach.

Another name to monitor, per Matt Barrows of the Sacramento Bee, is Jaguars director of player personnel Chris Polian. The son of Hall of Famer Bill Polian did not meet with with the 49ers this month as the organization conducted a thorough search featuring nine interviews.

Despite going 2-7 in his most recent head-coaching audition, Mike Mularkey appears to be the clear favorite to become the Titans’ next full-time head coach, Mike Florio of Pro Football Talk reports.

The PFT reporter hears it would be a “massive upset” if the Titans don’t retain Mularkey, who replaced Ken Whisenhunt after seven games last season. This goes along with NFL.com’s Ian Rapoport reporting earlier today the Tennessee job is Mularkey’s “to lose.” 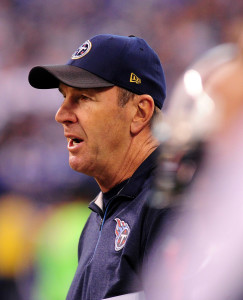 Owner Amy Adams Strunk developed a strong relationship with Mularkey, per Florio, last season and prefers the 54-year-old coach keep the job. Recent GM candidates Chris Ballard and Chris Polian did not share Strunk’s views on Mularkey’s potential, so they were not hired, Florio reports.

New GM Jon Robinson reportedly did agree to consider keeping Mularkey, who Florio notes will be offered a short-term deal with a salary on the low end of the head-coaching earnings scale.

Rapoport points out the Titans could make this official today. The team’s also interviewed Doug Marrone and
Teryl Austin and is set to meet with Titans DC Ray Horton today.

Mularkey carries an 18-39 coaching record and would be a rare third-try head coach without a playoff berth on his resume. His best season came with the Bills, when they went 9-7 in 2004. Mularkey’s Buffalo tenure lasted just two years, and his Jaguars stint, in 2012, produced a 2-14 mark.

Mularkey joined the Titans as their tight ends coach in 2014 before being elevated to assistant head coach prior to the 2015 season’s outset.

The Titans have gone 5-27 the past two seasons.

The Titans are scheduled to interview Chiefs director of football operations Chris Ballard for their general manager vacancy on Monday, reports Tom Pelissero of USA Today (Twitter link). We learned yesterday that Tennessee had requested and received permission to interview Ballard.

Ballard, who just completed his third season with Kansas City, has been an NFL personnel man for 15 years, and was considered a strong candidate for the Bears GM job at this time last year. He’s one of several candidates for the Titans position, joining former Broncos general manager Ted Sundquist, Giants exec Marc Ross, and former Lions GM Martin Mayhew. The club also confirmed today that it had interviewed Jaguars director of player personnel Chris Polian and Buccaneers director of player personnel Jon Robinson.

As the Titans seek to replace Ruston Webster, there’s a question as to how their GM search will affect their hunt for new head coach. As Alex Marvez of FOX Sports notes (via Twitter), it’s a little surprising that Tennessee got such a late start; while the Dolphins, for example, have already completed seven head coaching interviews, the Titans have completed zero, as our head coaching search tracker shows.

7:47pm: The Titans announced that they interviewed Martin Mayhew for their GM position today, as Aaron Wilson of The Houston Chronicle tweets.

Jaguars director of pro scouting Chris Polian will interview with the Titans on Friday for their open GM job, as Paul Kuharsky of ESPN.com writes. Meanwhile, Buccaneers Director Player Personnel Jon Robinson has been given the OK to interview for the Titans’ GM job, Roy Cummings of The Tampa Tribune tweets. Robinson, a Tennessee native, was mentioned as a potential candidate for the job shortly after Ruston Webster was let go.

2:40pm: When we last checked in on the Titans’ hunt for a new general manager, the team was in the process of scheduling an interview with Giants vice president of player evaluation Marc Ross, and was aiming high by targeting Ravens assistant general manager Eric DeCosta, who typically turns down requests for interviews.

Unsurprisingly, DeCosta has indeed declined the opportunity to interview for the GM position in Tennessee, according to Albert Breer of the NFL Network, who tweets that the veteran Ravens executive will be staying put in Baltimore. Presumably, the Titans expected that outcome, but figured it didn’t hurt to ask.

Along those same lines, the Titans are one of two teams – along with the Lions – that hopes to interview Vikings assistant general manager George Paton, per Ian Rapoport of NFL.com (Twitter link). Paton is another executive who rarely explores the opportunity to leave his current organization, so it seems unlikely that he’ll pursue the Titans’ job, but it sounds like he hasn’t officially said no yet.

As for Ross, a candidate who definitely will be meeting with the Titans, his interview is scheduled for Thursday, according to Josina Anderson of ESPN.com (Twitter link).

The latest from Detroit:

As the second slate of games near halftime, lets’s take a look at the latest from Jason La Canfora of CBSSports.com…

The Lions announced on Thursday that they’ve established an advisory board to lead the search for a new general manager, while continuing to consult with the league’s career development advisory panel. That panel has met twice already and will meet twice more before the end of the season, but Tom Pelissero of USA Today has already learned the identities of five of the leading candidates.

According to Pelissero, some of the early frontrunners are Chiefs director of football operations Chris Ballard, Ravens assistant GM Eric DeCosta, Vikings assistant GM George Paton, Jaguars director of player personnel Chris Polian, and Packers director of player personnel Eliot Wolf. All five executives have been linked to the job in one fashion or another, though many have speculated that the Lions will not be able to lure Wolf away from Green Bay, where he is thought to be the heir apparent to the GM job. Ballard and DeCosta, two highly-respected NFL execs, were on last year’s list cultivated by the panel. The Jets used the panel last year to make their hire of Mike Maccagnan, who was then the Texans’ director of college scouting.

On Thursday afternoon, the Lions hired Rod Wood as the team’s new president, taking over the position previously held by Tom Lewand. Wood, of course, will be an integral part of the team’s advisory board to find its next GM. That group also includes owner Martha Firestone Ford and the team’s board of directors and vice chairmen, all of whom are members of the Ford family.