Browns offensive tackle Jack Conklin missed quite a bit of time during his second year in Cleveland, seeing two separate trips to the injured reserve. He spent three weeks on injured reserve after an elbow injury sidelined him in early November. In his first game back from injury, Conklin tore his patellar tendon and promptly returned to injured reserve for the rest of the season.

According to Mary Kay Cabot of cleveland.com, Conklin’s recovery is coming along quite well. While he remains off the field in OTAs, rehabbing on his own, and likely will be held off the field in mandatory minicamp, as well, Conklin is expected to be ready to practice at the start of training camp. He will likely be limited as camp opens up, but Conklin is expected to be ready to start once the Browns roll into Charlotte this September to open their season.

Here are a few more notes out of the AFC North, starting with another note from The Land:

Additionally, according to Brooke Pryor of ESPN, Khan has promoted existing staffer Dan Colbert, the son of the former general manager. The younger Colbert had served as a veteran college and pro scout and will now be elevated to a senior-level position.

Pryor also provides an additional note that Khan will continue the Steelers’ player personnel tradition of not conducting contract negotiations during the NFL season.

Here are a few other staff hires from around the NFL, starting with another hire in the AFC North:

Tuesday brought about an end to the lengthy search conducted by the Steelers to find their new general manager. With Omar Khan being promoted to the role, other moves are forthcoming as well. 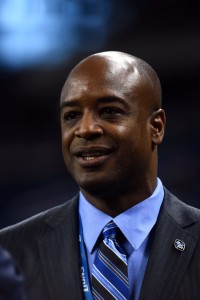 Veteran NFL reporter Aditi Kinkhabwala tweets that Pittsburgh is set to hire Sheldon White as an addition to their player personnel department, creating an overlap in duties with Andy Weidl. The latter was announced as the Steelers’ new assistant GM just before the Khan news came out.

White began his front office career with the Lions in 1997. The bulk of his tenure with the team was spent in their personnel department, where he worked from 2000 to 2015. The 57-year-old took over as interim GM after Martin Mayhew was fired midseason, but that year was his last in Detroit. He departed not long after the team selected Bob Quinn as its new GM, working in Washington as a scout this past season. White’s son, Colby, has worked in the Steelers’ front office for the past two years.

Kinkhabwala also reports, however, that Brandon Hunt could be on the move soon. The other internal candidate to be given consideration for Pittsburgh’s GM job, Hunt has received interest from both the Bills and Eagles this offseason. Not surprisingly given yesterday’s developments, then, Kinkhabwala states that Hunt “could be in line for a VP spot” in Philadelphia. Such a hire would mark a significant addition for the Eagles, but it would create another notable vacancy in the Steelers’ new-look front office.

New Lions general manager Bob Quinn continues to make changes in Detroit’s front office, and the latest executive to leave the team is the one Quinn replaced in the GM role. According to Justin Rogers of MLive.com, the Lions have parted ways with longtime director of pro personnel Sheldon White, who served as the team’s interim GM following Martin Mayhew‘s mid-season dismissal.

White was one of several candidates to interview for the Lions’ permanent general manager position, but when the team ultimately decided on Quinn, White’s future in Detroit became uncertain. The new GM said nearly a month ago that he wasn’t sure whether or not White would be back with the team.

At the time, I noted that White had been with the franchise for nearly two decades, in several roles and under multiple regimes, meaning it would be a bit of a surprise if he went anywhere. While White joined the Lions as a scout in 1997, he has spent most of his tenure with the club as the director of pro personnel, having been promoted to that role under former GM Matt Millen in 2000.

It’s not clear yet whether White’s departure was solely Quinn’s decision, or whether the two sides came to a more mutual agreement. Either way though, it figures to be just a matter of time before a seasoned executive like White lands with another team — that may happen sometime after this year’s draft, with teams like the Eagles looking to make front office changes at that point.

No Decision Yet On Lions HC Jim Caldwell

The Lions introduced new general manager Bob Quinn today at an afternoon press conference, but the team has yet to make a decision on head coach Jim Caldwell, who remains in limbo. While Quinn initially said during today’s presser that he met with Caldwell today, he later acknowledged that it was more of an introduction than a meeting — it only lasted about 30 seconds (Twitter links via Tim Twentyman of DetroitLions.com and Dave Birkett of the Detroit Free Press).

Quinn doesn’t expect to meet again with Caldwell today, and doesn’t have a timetable for his decision on the head coach, but he’d like to make that call sooner rather than later (Twitter links via Birkett and Twentyman). Still, the former Patriots executive won’t rush the decision, and would like to get to know Caldwell. Quinn added today that he expects to meet with Matthew Stafford and Calvin Johnson before announcing anything on Caldwell (Twitter link via Birkett).

As Quinn deliberates on Caldwell, we’ve got a few more items to pass along out of Detroit, so let’s dive in and round them up…

Now that the Lions have hired Bob Quinn as their new general manager, Detroit coaches are wondering if they still have a job, as Dave Birkett of the Detroit Free Press writes. Obviously, there will be some turnover as a new regime takes over, but two Lions coaches told Birkett they have not been updated as to the status of their employment.

However, the club’s head coach, Jim Caldwell, might be one of the lucky ones, as a Patriots insider tells Mike O’Hara of Lions.com that Quinn is likely to retain Caldwell for 2016. Detroit’s upper management has been adamant that the new GM would get to decide Caldwell’s fate, and while we’ll have to wait for official word, at least one source thinks Caldwell will get to stay.

Meanwhile, while interim GM Sheldon White was thanked in a team statement, there’s been no indication as to whether he’ll revert back to his old position of director of player personnel, tweets Paula Pasche of the Oakland Press.

More from around the league…

The latest from Detroit:

The Lions have selected former NFL general manager Ernie Accorsi to help guide them through the process of finding a new GM of their own, the team announced today in a press release. Accorsi, who previously served as the general manager of the Colts, Browns, Giants, will act as a consultant for Detroit as the team attempts to identify a permanent GM to replace Martin Mayhew.

“We are most pleased that Ernie Accorsi will serve as consultant for our GM search,” new Lions president Rod Wood said in a statement. “Ernie’s reputation is impeccable. Not only did he succeed as a general manager in the NFL, but his work as a consultant with teams like Chicago and Carolina is well documented.”

Less than a year ago, Accorsi acted as a consultant when the Bears were looking to replace former GM Phil Emery, eventually helping to identify Saints executive Ryan Pace as the man for the job. As Wood notes, Accorsi also took part in the Panthers’ search for a GM, which saw the team land on Dave Gettleman.

Per Albert Breer of the NFL Network (via Twitter), Wood said today that Accorsi has pledged exclusivity to the Lions during this winter’s hiring cycle, meaning he won’t be consulting for any other teams that may have a position open up in the front office in the coming weeks or months.

Wood reiterated today that interim general manager Sheldon White remains a candidate for the permanent job in Detroit. When asked if the coach and the GM could end up being the same person, Wood said that’s not the team’s plan at the moment (Twitter links via Dave Birkett of the Detroit Free Press).

Rams wideout Tavon Austin will be returning to his hometown of Baltimore to take on the Ravens this weekend. The former West Virginia University standout is happy playing in St. Louis, but he did tell Joe Lyons of STLToday.com that the Ravens did check up on him during the 2013 draft.

“They were definitely staying in touch,’’ the receiver said. “I had a great meeting with them. The GM (Ozzie Newsome) is an awesome guy. I thought they were going to pull the trigger, but Coach Fisher did. I’m proud he did and I’m happy to be a Ram.’’